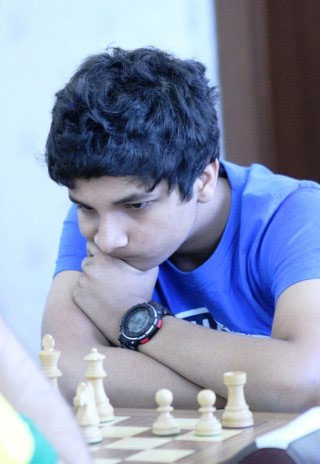 Former Under-14 world champion and Grandmaster Vidit Gujrathi won the bronze medal in the World Junior Chess Championship after settling for a quick draw with winner Yu Yangyi of China in the 13th and final round that concluded in Kocaeli, Turkey.

Gujrathi joined an elite list of Indians winning medals at the world junior champions starting from a gold medal by world champion V Anand in 1987, gold by Harikrishna in  2004, gold by Abhijeet Gupta in 2008 and Bronze by Sahaj Grover in 2011.

With Yangyi taking gold, the silver went to defending champion Alexander Ipatov of Turkey who defeated Aleksander Indjic of Serbia in the final round.

Gujrathi tied for third spot along with Peruvian Grandmaster Jorge Cori and had the better tie break for his bronze medal.

Playing the black side of a Caro Kann, Gujrathi had little to do with black pieces as Yangyi was satisfied with a draw ensuring him the first place. On the second board Ipatop played it tough and defeated Indjic in a one sided affair.

“It’s my best effort since winning the world under 14 a few years back,” said Gujrathi after his medal winning performance adding quickly that he wants to break into the 2600 ELO rating club soon.

S P Sethuraman needed to win to be in contention of a medal and Jorgi Cori was not relenting as white. It was a Grunfeld defense wherein the Indian spurned down chance to repeat and draw and eventually ended on the losing side after gifting a handful of queen side pawns.

Grandmaster Sahaj Grover lost his second game in a row when he could not handle the complexities of a French Winawer against A R Saleh Salem of UAE.

Ending on 7.5 points, it turned out to be a mediocre performance for Grover who scored 50 per cent against the top three ranked players.

Debashish Das will have to wait for the confirmation of his Grandmaster title till the next tournament after he drew the final round game here. Needing a victory to complete his GM title, the Indian was held to a draw by Radoslav  Dmitrov of Bulgaria.

In the girls’ championship that concluded simultaneously, Aleksandra Goryachkina of Russia won the gold scoring 10.5 points in all while the silver went to Zhansaya Abdumalik of Kazakhstan. Top seed Alina Kashlinskaya of Russia won the bronze.