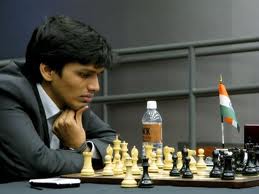 Harikrishna Among Leaders
Pentala Harikrishna has scored over fellow former world junior champion Lenier Dominguez of Cuba and drawn top rated Levon Aronian of Armenia and Sergey Karjakin of Russia in the first three rounds to be among the leaders at Wijk aan Zee in the Netherlands.
In a cost-cutting event, many of the world champions like Vladimir Kramnik, Veselin Topalov, Viswanathan Anand and Magnus Carlsen are not in the 2014 edition. Also, the players have been trimmed from 14-player to 12-player format. Yet, this edition has a category 20 field with many younger stars.
While Harikrishna’s tournament rating performance has zoomed to 2900 from a start rating of 2706. Harikrishna lives in Hyderabad and represents Bharat Petroleum Corporation in Indian events. He also won the world junior at Kochi 2004.
Another Asian, Wesley So of the Philippines has also started well to among the six leaders on two points from three games.  Aronian is the top seed, followed by Nakamura and Caruana. Gelfand is the oldest competitor being 1968-born.
Placings after three rounds: 1-6. P Harikrishna (Ind), Wesley So (Phi), L Aronian (Arm), F Caruana (Ita), H Nakamura (USA), Anish Giri (Ned) 2/3 each; 7-8. S Karjakin (Rus), R Rapport (Hun) 1.5 each; 9-10. L Van Wely (Ned), L Dominguez (Cub) 1 each; 11-12. Boris Gelfand (Isr), A Naiditch (Ger) 0.5 each.