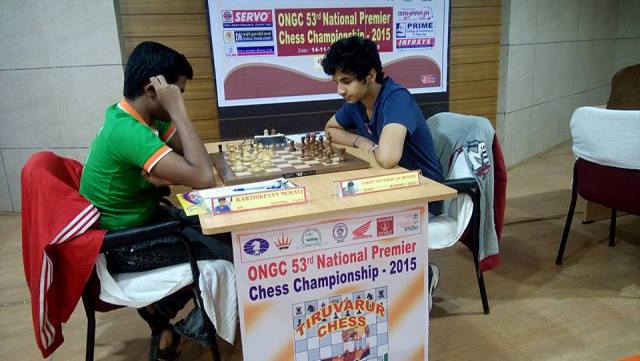 Initiating complications from move 18, Karthikeyan ended up a rook for minor piece ahead. Vidit put up stern defence. The Chennai player won peeling off the black defences layer by layer to deserve a good win.

Karthikeyan accepted a quiet draw in a rooks and minor piece ending against Kunte. He will need a very strong finish to raise his norm chances. A total of 8.5/13 is required for a GM norm in this event. Karthikeyan will need to score 2.5/3/

M.R. Venkatesh claimed a draw via the 50-move rule when Arghyadip Das could not use his rook and bishop to defeat the rook. It was the longest game of the event at 130 moves.

Defending champion Sethuraman benefited from a defensive flaw by Swapnil Dhopade and won in 35 moves. Swapnil gave up a queen bishop pawn that led to Sethuraman converting the advantage with nice play.

Shyaam Nikil’s unusual variation with the Ruy Lopez as black was well exploited by Neelotpal Das. Neelotpal Das won the queen for rook and knight and use that advantage to win in 54 moves.

Deep Sengupta drew Rathnakaran despite being one pawn short in the rook ending after 62 moves.

Praneeth Surya tore Shyam Sundar to pieces in 26 moves with the black pieces. Praneeth went for a wild attack and Shyam Sundar neither got his king side attack off the ground nor defended on the queen side. Shyam Sundar resigned when his pieces were huddled in a small area of the board. Praneeth had not won a single pawn when white resigned!