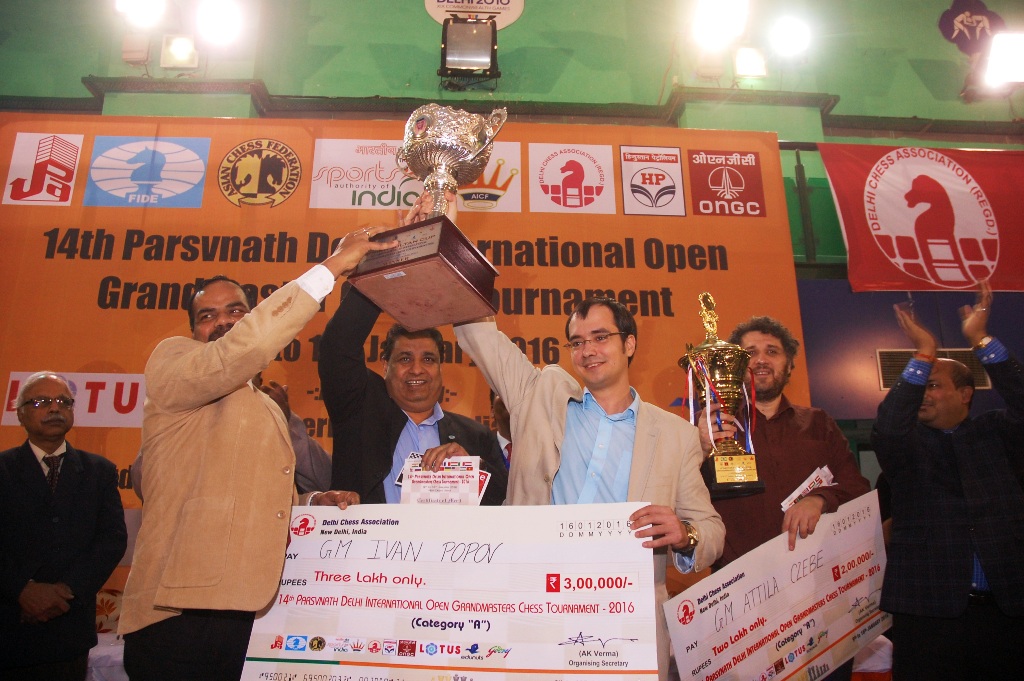 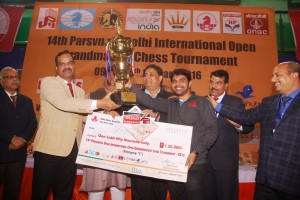 International Master Sayantan Das defeated Vitaliy Bernadskiy of Ukraine to make a Grandmaster norm after the end of the tenth and final round of 14th Parsvnath Delhi International Chess Festival that concluded here.

It was an intense drama in the final round of Rs. 12.5 lakh prize money tournament as overnight sole leader Ivan Popov suffered a shock defeat at the hands of veteran Grandmaster Valeriy Neverov of Ukraine.

While it did not alter the final rankings, it counted for a thrilling day as Neverov defeated Popov in a class act with white pieces. At the end it was a three-way tie for the top spot on eight points each with Hungarian Grandmaster Attila Czebe who also reached the magical eight points.

As the tie was resolved, Popov still had the best tiebreak and the Russian walked away with the winner’s cheque of Rs. 300000/-. For the records, Czebe came second second and Neverov had to be content with a third place finish.

Amongst the Indians, M R Lalith Babu scored a fine victory in the last round over Yuri Solodovnichenko of Ukraine to tie for the fourth spot and finish sixth overall. Also ending in this set on 7.5 points were Sayantan Das and Vaibhav Suri who finished seventh and ninth respectively.

The day however belonged to Sayantan who made a Grandmaster norm with a commendable show. Vitaliy Bernadskiy was outdone in the middle game where he lost a couple of pawns without much compensation and slowly but surely Sayantan converted his advantage.

In the category ‘C’ that also concluded here simultaneously, N Srihari emerged victories scoring a whopping 9.5 points out of a possible ten. Srihari won Rs. 150000/- for his efforts. In a three-way tie for the second spot on nine points, Ashutosh Bannerjee finished second, Shanya Mishra was declared third while Manish Kumar Sharma finished fourth. The category ‘C’ had a prize fund of Rs. 1100000/- (Rupees Eleven Lakhs)