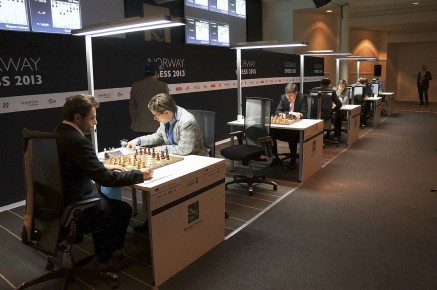 Sergey Karjakin who moved from Ukraine to Russia a few years back to improve his chess started with a whopping 4/4 and went on to win the Supreme Masters 2013 at Norway on May 18, 2013. Karjakin recorded wins over Aronian, Nakamura, Wang Hao, Radjabov and played at a massive Elo rating performance of 2886. He would be gaining about 12 Elo.

Top seed Carlsen was held to five draws and was defeated by China’s Wang Hao in the penultimate round. Carlsen and Nakamura finished second-third with 5.5 points.

World champion Viswanathan Anand lost to Nakamura and Wang Hao to tie for the fourth place on five points. Anand drew Carlsen with the black pieces in a game sought after by the Norway media. Anand beat Topalov, Radjabov, Hammer and drew Karjakin, Carlsen, Svidler and Aronian.

Anand who started at Elo 2783 played at 2803 and should be gaining rating though he would not be happy to have lost the final round to Wang Hao after sacrificing his queen.

Norway organised its first 21 category event. Despite replacing Kramnik in the last minute, Svidler did well. Both the Norwegians, Carlsen and Hammer would be losing Elo!