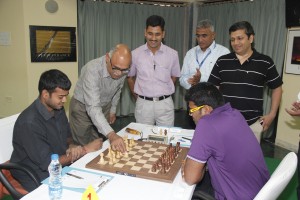 In the 4th round of the event, GM debashish das of Orissa scored his 1st victoyr by winning against K. Rathnakaran of railways. In benoni defence playing with white debashish won the game after 41 moves.

2nd Seed GM K. Sasikiran of ONGC won against IM Stany from AAI in sicilan najdorf variation Sai won the pawn on 31st move and converted it to a full point after 49 moves Sasi moves into lead with 3.5 points after 4 games. 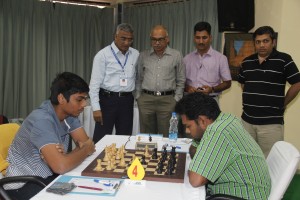 GM B. Adhibaan of IOC created a major upset of the day be defeating Parimarjan negi of BPCL. In Sicilian schevenengean opening playing with white negi misplayed the opening and lost a pawn in the middlegame, adhiban played very well to convert the material advantage into a win. With this win Adhiban moves to joint second position with 3 points.

G Aakash held GM deepan Chakravarthy of TN to a draw, deepan played ruylopez open variation, but missed a tactic in the middlegame to loose a pawn, deepan tried all his tricks to draw the game after 34 moves.

On the top board GM lalithbabu of IOC and GM Vishun prasanna agreed to a draw after 60 moves struggle. 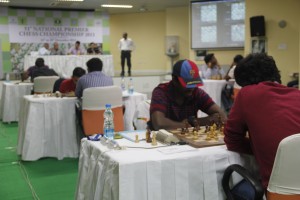 2 Guest of the day Keenly following The Games