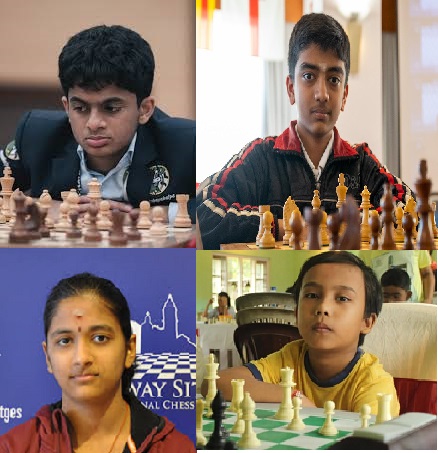 In the Under 18 Open category finals, top seed GM Nihal Sarin defeated GM Sargsyan Shant (Elo 2596) of Armenia 1.5 – 0.5, prior to which he’d accounted for IM Sonis Francesco (Elo 2483) of Italy in the semi-finals. Nihal had to play the semi-final and the final in back to back matches, as his initial semi-final opponent – Hepler Ramirez Narayana (Peru) – was found violating the tournament fairplay policy of FIDE.

Woman International Master Rakshitta Ravi brought the third Gold for India in the Under 16 Girls section. Rakshitta (Elo 2190) played with strength and consistency bringing down players higher rated than her viz., WFM Hernandez Gil Ineymig (2348) of Cuba, WGM Garifullina Leya (2348) of Russia and WIM Song Yuxin (2290) of China. The win over WIM Song Yuxin with a 1.5 – 0.5 margin fetched the Indian girl the coveted World Under 16 Girls rapid title.

In team standing, India with three Golds and a Bronze medal, took the second spot behind USA which finished with a tally of 4 Golds, 2 Silver and 2 Bronze. Iran took third place with one Gold and one Silver medal.