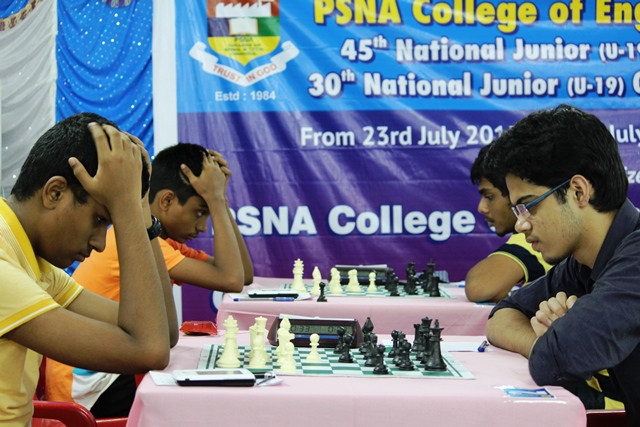 Grandmaster Aravindh Chithambaram of Tamil Nadu halted the winning spree of former national champion G. Akash also of TN by beating him in the eighth round of the 45th National Junior Chess Championship, organised by PSNA College of Engineering & Technology and Golden Knights Chess Academy, being held at the PSNA College of Engineering & Technology, today. In the 30th National Under 19 Girls’ Chess Championship, WIM Michelle Catherina of TN wrested the lead from WFM GK Monnisha in a crucial encounter. Michelle has 6.5 points to her credit, with five others on 6 points. Aravindh and Akash share the lead with 7 points each in the open section. The two grandmasters Aravindh and Karthikeyan Murali are slated to meet in the ninth round.

Aravindh Chithambaram played the white side of an irregular opening arising from Sicilian defence with former national champion G Akash. Akash relinquished two his minor pieces to obtain a rook in compensation. They exchanged queens on 23rd move and thereafter Aravindh simplified the position leading to a bishop and knight Vs rook ending. When Aravindh’s outside passer pawn started its march towards eighth rank, Akash resigned.

Grandmaster Karthikeyan Murali started with the Spanish opening against Ankit Gajwa of Delhi, wherein the latter played well to maintain equality in the middle game. But Karthikeyan’s better pawn structure on the queen side compared to three pawn islands for Ankit tilted the verdict in Karthikeyan’s favour.

WIM Michelle Catherina used her favourite English opening against top seeded GK Monnisha on the top board. In the middle game, Monnisha had an extra pawn, but Mischelle’s bishop outpost on d6 made Monnisha’s light squared bishop totally useless. Monnisha had to lose the game when Michelle’s king side pawn rolled forward with the support of her king.

WFM Srija Seshadri of Tamil Nadu got the better of Kerala’s CH Megna in mere 24 moves in a Larsen’s attack game.

In a Reti oening, Bala Kannamma tried to repeat the position three times to claim a draw in the middle game against R. Vaishali. But, Vaishali skilfully prevented the chances and capitalised her double bishop advantage to post a win in 45 moves.