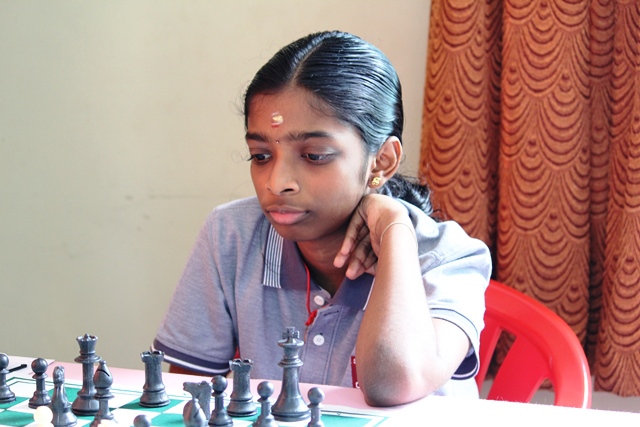 With one more round remaining, grandmaster AravindhChidhambaramof Tamil Nadu has scored 8.5 points, half a point ahead of his team mate G Akashand has more chances to win the coveted PSNA College of Engineering & Technology National Junior Chess Championship, organised by PSNA College of Engineering & Technology and Golden Knights Chess Academy. Former national champion G Akashkept his chances alive, reaching 8 points with a win over third seeded HarshaBarathkoti of Telangana. In the girls’section, R Vaishali of TN joined her team mate Michelle Catherina at the top, with 8 points each in their kitty. HarshitaGuddanti of AP and GK Monnishaof TN are trailing by half a point.

Aravindh had a quick formal draw with his statemate B Kumaran in 16 moves of a Philidor defence.

Runner up of the 2014 edition HarshaBarathakoti clashed with fourth seeded G Akashin an absorbing tussle ofLarsen’s opening.Akash sacrificed his knight and bishop for a rook, but had two more pawns to compensate. Harsha’s extra bishop was trapped by Akash on 41st move and the resultant double rook for Akash against a rook and knight helped him to secure a point comfortably.

GM KarthikeyanMuraliof TN used Kings Indian defence against V Varun of Telangana to pulverise the latter in just 23 moves.Karthikeyan is on third pot with 7.5 points, along with Sai Viswesh of TN and D Bala Chandra Prasad of AP.

Both WFM Mahalakshmi and WIM Michelle Catherina from Tamil Nadu played an attacking game of Nimzo Indian defence, but the game ultimately ended in a tame draw after 27 moves.

In the tussle between two former world champions, former Under 8 and 12 champion R Vaishali of Tamil Nadu and former under 10 girls champion Priyanka Nutakki of AP, the latter blundered to lose rook towards the end game, to gift a point to Vaishali.

Monnisha’s Steinitz variation of French defence against Delhi’s MadhurimaShekharhad an almost equal position in the end game, both having a rook and two pawns on same files. But, Monnisha’s advanced pawns posed a threat to Madhurima, who resigned after well fought 58 moves. Harshita had a peculiar position with five pawns in the end game, whereas her opponent SrijaSeshadri of TN had nothing. Srija fought gallantly, but could not prevent Harshita from winning.