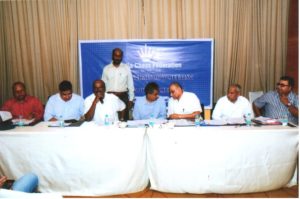 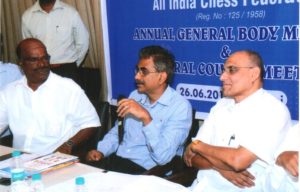 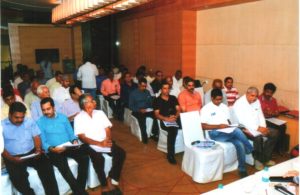 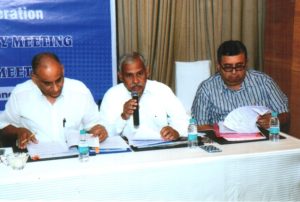 As a special case players even those who have not participated in 2015 National Amateur Chess Championship are eligible to participate. However only those players who are registered with AICF are eligible.

3. GM S.P.Sethuraman won the Gold in Open and WGM Bhakti Kulkarni made India proud by winning the Women title in the Asian Continental Chess Championship held at Uzbekistan. The members congratulated both the champions. IM Vishal Sareen accompanied them as the coach.

It was decided that all players registered with the All India Chess Federation and who are ELO rated, are eligible to participate subject to age regulations.

It was unanimously resolved to allow 15 minutes default time for players in all National Championships and it was decided that it should be strictly followed.

It was resolved to ban him for life from being associated with the game of chess in any manner and in any capacity.

8. To amend the existing Rule and to decide on exceptions to players regarding career rating for playing below rated events and regarding participation of players in Round Robin tournaments abroad:

A committee with the following members was formed to submit a report to the next Central Council meeting for consideration.

The Manipur Chess Association was expelled and disaffiliated as a member of the All India Chess Federation. In its place an ad-hoc committee consisting of the following members was formed to look after the interest of players.

Mr.Pradip Kumar Choudhuri of Tripura was nominated as Chairman of the Committee. Other members of the committee are Mr.Atanu Lahiri (Bengal), Mr.Rachhuunga Ralte (Mizoram) and Mr.Hari S Sharma (Sikkim) and Charlei Bhuyan (Assam).

It was decided that all GMs / IMs / WGMs / WIMs will be eligible to participate in Commonwealth open Championship even if they have not participated in the immediate previous year National Challenger / Premier Chess Championships.
It was also decided to permit GMs / IMs / WGMs / WIMs in Commonwealth / Asian / World Cadet and Youth Championships even if they have not participated in the corresponding immediate previous year National age group championships, subject to age.
All the above entries will be considered only as Donor / Special Entries and
subject to the FIDE / Asian / Commonwealth regulations.

15. Eligibility Criteria while playing in India:

As per FIDE Regulations the number of participation in any country cannot exceed one third of the total number of participants. Therefore for the World Junior Chess Championship to be held at Bhuvaneshwar, the following eligibility criteria will apply in the following order.
i) Seeded players as per FIDE guidelines
ii) The first three of the Under 19 National Championship 2015
iii) GM in Open and WGM in Women section,
iv) Previous year age group World champions
v) IM (Open), IM (Women), WIM, all medal winners of the immediate previous year Asian / World, All those who participated in the 2015 National Junior Chess Championship and all National Champions of 2015. Note: the above players in section (v) will be considered as per their ELO rating as on July 01, 2016.

On popular demand, it was decided that the prospectus of all the FIDE rated tournaments conducted in India should be posted on the AICF website.

The return match between India and China will be held at China during November 2016.