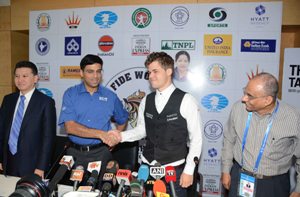 Anand Announces His Team At Press Conference
By Arvind Aaron

In a surprise move, World Champion Viswanathan Anand announced his team of seconds at the opening joint press conference at the Hyatt Regency Hotel in Chennai on November 7, 2013.

“I am not returning the compliment,” said challenger Magnus Carlsen of Norway who did not reveal his team of trainers. In the last few years it has become a practice for the players not to reveal the seconds or trainers until the match is completed.

Leko and Wojtaszek have worked with Anand before. Leko had played for the world chess title and lost the title match to Kramnik. The Indian trained in Germany for this match and is fully prepared for this match.

“I am really happy that the World Chess Championship match is happening in Chennai. I am thankful to the Chief Minister Jayalalithaa without whom this match would not have taken place here. I really look forward to playing the event in my home city,” said Anand.

“Everything is good so far. Looking forward to the match to start,” said Carlsen. The Norwegian was little defensive and cautious.

Playing and staying in the same hotel saves commmuting time of atleast half an hour said Anand who added that it meant a lot during zero tolerance. Anand was a little relaxed and free all through.

On how he prepared for the match he said he worked as he always did. Let us see how it works said Anand in a concluding remark.

I appreciate Anand for revealing his team. I am not going to do it said Carlsen who sat at an angle avoiding Anand who was seated beside him.

FIDE President Kirsan Ilyumzhinov congratulated India on becoming No.1 nation in the number of FIDE rated players on the rating list and listed Anand’s achievements in his address to the press.