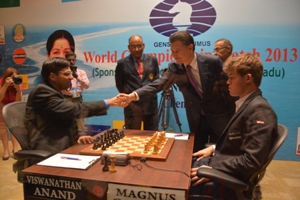 The opening game of the World Chess Championship match ended in a quick 16-move draw at the Hyatt Regency Hotel in Chennai on November 9, 2013.

“I have had a few such embarrassing draws in the Candidates Matches,” said Carlsen about ceding the draw despite playing with the white pieces.

“We exchanged information in game one,” said Anand about the draw. The information is what they had prepared as white and black. The next time, Anand plays black will be on October 12. 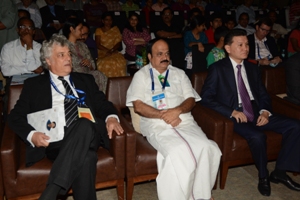 A last minute clamouring for tickets and a huge crowd saw every seat taken as the first move was made in the World Chess Championship match. When it happened, Chennai, India joined the several cities which has staged this mega big ticket event. The happening of this match is a milestone in Indian chess. The women world championship took place in Delhi in 2000 but the men’s finals of that period took place in Tehran after the knockouts till the semifinals were played in Delhi 2000.

Recently, India crossed France as the nation with the most FIDE rated players. Of this number, Tamil Nadu has around one-third of the rated players of India. Chennnai city, has the most rated players in the world and is rightly hosting the world chess championship match.

The symbolic first move was made by the FIDE President Kirsan Ilyumzhinov and it was Nf3. The game started like a Reti opening but got transposed into a fianchetto variation of the Grunfeld. 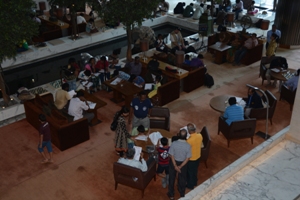 After white’s 13th move, there was a way for black to repeatly attack the white queen with the knight and they drew in 16 moves. The 30-move stipulation necessary to play before agreement of draws does not apply in this case of perpetual activity. The game was over in less than one and a half hours of play.

Asked if black could have played on with a minimal advantage, Anand replied and said computers will like such position for black but it was difficult to find a strong line for black to play and seize the advantage.

“There was no option to play on,” said Carlsen. In the long run white is stable and when you play very strong opponents such games will happen once in a way.

After all these months it was nice to get one game through and focus on the remaining eleven games said the Indian title holder.

Asked if the draw was a nice way to start the match with black, Anand replied saying it was early to react to every twist and turn in a long match. 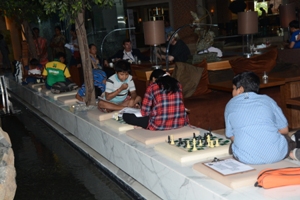 About handling pressure and playing at home, Anand said he was fully concentrating on the matches and has his usual set up surrounding him. So he implied the pressure of playing at home was minimal or none.

FIDE’s 13th world champion Garry Kasparov has called this a match between the legend and the legend in the making. Kasparov also put out a picture of his 2009 training with Carlsen at Croatia. This may have benefited Magnus in the short run as he even overtook Kasparov 2851 all-time high rating.

The commentators are Susan Polgar, former world women’s champion and Lawrence Trent. Susan, known as Zsuzsa Polgar had moved from Hungary to the United States and is a Grand Master. Trent is a British International Master. Besides, there will also be Grand Master R.B. Ramesh and Woman Grand Master Tania Sachdev giving commentary.

The Anand team includes players he is comfortable with. He had a session with Krishnan Sasikiran in 2000 when the Kramnik v Kasparov took place at London. In the 1998 world championship match at Lausanne, Anand had Elizbar Ubilava, Artur Yusupov and Peter Leko as his seconds. So, Leko is back in his team. Raduslav Wojtaszek of Poland and Sandipan Chanda from Kolkata are the other trainers and both have also worked together for more than five years.

Anand’s main trainer since 2003 was Peter Heine Nielsen. Not having Nielsen in this match will be a blow to Anand. Nielsen works with both Anand and Carlsen as trainers and has decided to stay away from both players in this match. 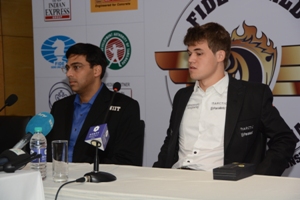