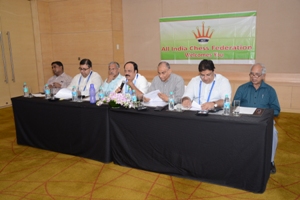 Best Organised Event In Two And A Half Decades: FIDE
By Arvind Aaron

Welcoming members of the All India Chess Federation to the meeting at the Hyatt Regency Hotel, the President, J.C.D. Prabhakar said this is the time to organise more chess events in every nook and corner of the nation. 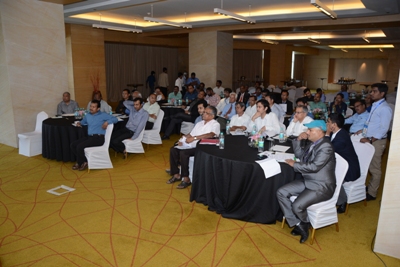 The President said he visited a small house in his constituency and a boy was playing chess without proper pieces and he arranged it quickly. He tried to say that the awareness levels for chess is at its peak and requested chess associations to help develop the game and provide tournament playing opportunities.

Updating members on the World Chess Championship, D.V. Sundar quoted from reactions obtained from the FIDE Presidential Board that also took place in this hotel. He said many of his colleagues in FIDE that this was the best organised world chess championship in two and a half decades