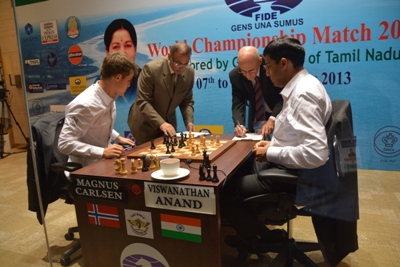 It has been a quiet weekend in Chennai with both games ending in quick draws. In the second game, the players repeated the position and made a draw in just 25 moves. The score is level at 1-1 after two games in the Tamil Nadu Government sponsored FIDE World Chess Championship match at the Hyatt Regency Hotel on November 10, 2013.

Monday is a free day and Magnus Carlsen plays with the white pieces in the third game on Tuesday. Ten games remain to be played in this 12-match series which has a prize fund of Rs.14 Crores.

“Sure we will have better games than these,” assured world champion Viswanathan Anand. Many expected Anand to go ahead today and take the lead in the match. Spectators have not had money’s worth so far.

Grand Master R.B. Ramesh of Chennai thought both players had a minor chance. Anand at first could have played 13.Nh5 with play for a pawn,” said Anand. Thereafter, on move 18, he could play 18.Qg4 and he reeled off many lines with attack for white.

“There was no risk for white in that line,” observed Ramesh who was surprised why Anand did not go for them. Early days in the match, the players are quiet and wanted to play risk free and keep the game in balance. 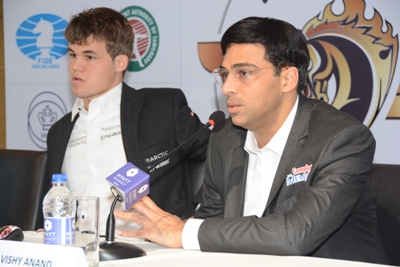 In a classical variation, Anand castled queen side and black castled king side. White’s chance came on move 18. Thereafter, when the queens were exchanged off the board, black’s chances were little better. However, white had a draw by attacking the f7 pawn and Anand went for it.

“If he did not have the repetition, white would have had to fight another 50 moves for the draw,” said Ramesh, one of the four commentators.

Asked which was the move of the day, Carlsen said he thought there was no move of the day! Carlsen was hilarious. “I would relax after two tough games,” said the World No.1 about what he would do on Monday. They have played 41 moves in all.

About past encounters, Carlsen said it did not matter. What we do here in the match counts, said Carlsen about past mutual encounters between them.

About the format for the world chess championship which is 12 games, Carlsen said it was good and Anand said this was not the moment to talk about the format during the match.

About what they intend to do this night and whether they will see the big football game, Anand said with the TV and computer on they might watch the Manchester United Match. “Now that you told me, I will watch!” said Carlsen.

Both players believed that their opponents were the toughtest in the world today. “The results of the last three years show that Magnus is the toughest player in the world to play,” certified Anand.

Many of the spectators included Chess Administrators of various Indian states as the All India Chess Federation had its meeting in the same hotel this afternoon. Quick draws however should not hamper ticket sales. Both players said “we are settling in into the match.” Hard to take risk early in the match. 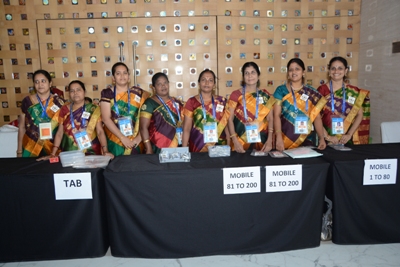