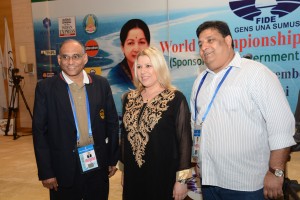 Anand Draws With White In Game Seven
By Arvind Aaron

World champion Viswanathan Anand drew the seventh match game by repetition of moves against challenger Magnus Carlsen of Norway at the Hyatt Regency Hotel in Teynampet, Chennai on November 18, 2013.

The scores after seven games is 4.5-2.5 in favour of the Norwegian challenger. In the remaining five games, Anand gets two whites and three black games. Carlsen appears to be the favourite at this juncture with the scoreline and trend favouring him.

The Rs.29 Crore budget event is sponsored by the Tamil Nadu Government. The prize fund is Rs.14 Crore and of this, 60% will go to the winner and 40% to the loser.

“I have the lead and this result suited me fine,” said Carlsen about this game. “We assessed the match and I will keep trying,” said Anand who is two games down in the best of 12 series.

Asked about what they did on the free day, Anand said the weather did noth permit them to do what they wanted. Carlsen said he played football and basketball without much success.

Both the players said there was psychology involved in a match. “Of course the outcome of game five influenced game six,” said Carlsen.

Carlsen said he was happy to see the chess boom happening in Norway. This match is well followed by a large number of people and they are also expecting and hoping the World No.1 to become Norway’s first world chess champion.

Game seven saw Anand opening again with the king pawn for the fourth time in the match. Carlsen responded with the Berlin variation of the Ruy Lopez. It was his second choice opening after trying the Caro-Kann in game two.

Anand chose the quieter 4.d3 variation and differed on move five when he exchanged the bishop on c6 square for the knight. Carlsen’s pawn structure was shattered but he was able to develop each and smoothly.

Both players castled queen side and had nothing happened much on the king side. After the pieces were exchanged off, a queen and knight were left on the board along with pawns.

With nothing much to play for, the players drew after 32 moves and took a draw by repetition of moves. The game lasted about two hours. Heavy monsoon rains continued during the day

On Tuesday, Carlsen will have the advantage of making the first move. Anand will have to make things difficult for Carlsen in the opening and middlegame. The Norwegian has had an easy ride so far though he accepted in the post game press meet that he was ‘nervous’ during some games.