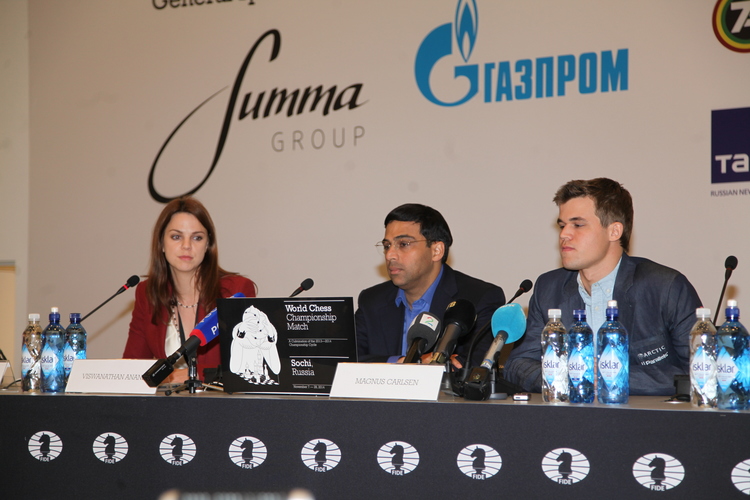 Down a game, challenger Viswanathan Anand came back strongly in the match by winning the third game against Magnus Carlsen with the white pieces to level the score at 1.5-1.5 in the FIDE World Chess Championship match at Sochi, Russia on November 11, 2014.

What eluded Anand in Chennai has now been achieved. That is an important win against Carlsen. Anand opened with the queen pawn and this time, Carlsen responded with the Queen’s Gambit and Anand chose the Bf4 variation which is less popular than Bg5.

This variation is known to give white sharp play. White’s powerful passed pawn on the queen bishop file left black defensive all along. Anand pressed hard and his 28th Ra1 was perhaps the move of this game.

Carlsen lost a bishop in a pin. He tried to give a rook for bishop and survive but the Indian nailed him with powerful moves to win in 34 moves. Carlsen was also in time pressure. Anand played fluently well and converted his home preparation into a fruitful win.

Nine games remain in this match. Carlsen has the advantage of playing five white games to Anand’s four in the remainder of the match. The first player to reach 6.5 points will win this match. Last year, Carlsen won 6.5-3.5 without suffering a single defeat.

“I went for a line Levon has been playing against Mickey in Bilbao,” said Anand about the opening that gave him a breakthrough in this match.

“Wrong choice of opening. He was well prepared. I could have done better. After Qb6 I thought I could hold but it did not work,” said Carlsen.

In classical chess you have not beaten Carlsen for some years. What is your reaction? “Quite pleased,” replied Anand. Anand had defeated Carlsen in rapid at Dubai this June.

“Obviously you need rest games. I found a reasonable balance between working and resting. I prepared 3-4 hours. I was in the gym yesterday,” said Anand about spending the free day.

“He was well prepared for the first game and now for this game,” said Carlsen. “I have recovered after losses, so still long way to go,” said Carlsen.

The match is well poised and how Anand defends with the black pieces in the fourth game will be important. Carlsen will be worried about his fifth game since he might have to go back to the Grunfeld or select another opening.

Anand fans can celebrate and hope this result breaks down Carlsen. Russia is organising this event at Sochi, a black sea resort.

Opening has been Anand’s forte and the opening phase has helped him in this game in a significant manner. His edge should be that this defeat should cause sleepless nights for Carlsen and his team as far as the openings are concerned.