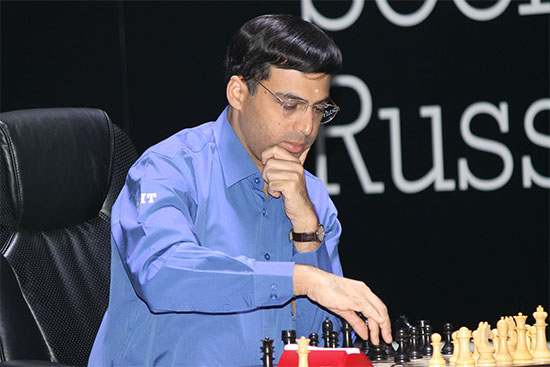 The fourth match game was drawn with the game being in balance for most of the five hours it lasted. The score is tied at 2-2 with both players winning one white and drawing with another white. In the eight remaining games, Anand and Carlsen will have four white games apiece. Thursday is a free day.

Game four started with Magnus Carlsen opting for 1.e4 again. He had tasted blood in the earlier white game. Having lost the third game with black, Carlsen also might want to win with his white strike.

Anand chose to show his second opening option, the Sicilian defence. When he opted for the Paulsen variation, Carlsen who had not come prepared for it, chose to play with the closed variation against the Sicilian.

Black obtained easy and comfortable equality after the early opening. Anand had an isolated queen pawn to defend but there were no weaknesses to defend.

After minor shifting of pieces, the game looked in balance. Black started well and according to Hikaru Nakamura who was commenting on www.chessclub.com  popularly known as the Internet Chess Club said white looked little better and black equalised again by move 26.

At one stage it looked like the players were waiting for the stipulated move 30 to happen before a draw can be offered or accepted. If they have to do it before, it needs to be justified and accepted by the chief arbiter Andrei Fillipowicz of Poland. 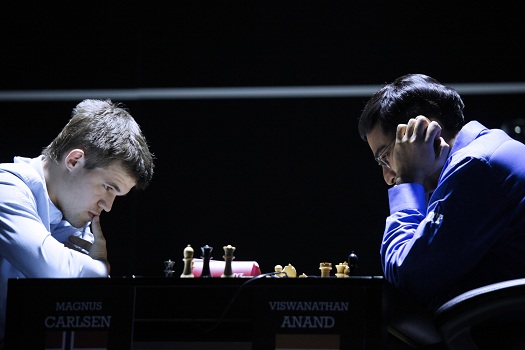 Anand’s 30…Rd5 was not anticipated but Nakamura liked this move. The computers also liked this move. With side each having a queen, rook and a knight besides the five pawns there was no action worthy of a sharp Sicilian.

Until move 33, Anand has never bothered to exchange queens in this match and has been doing well. Sergey Shipov had precisely given that advice before the Chennai match but when it was published in New In Chess, perhaps, Anand had stopped reading what people were writing about the match by then.

In the time scramble, Anand retained queens and exchanged off knights. Carlsen won a pawn in a queen ending but the expert opinion was “very drawish”.

With the advanced queen pawn, black had to find 41…Qd2 and after that both players were expected to sign a draw. There was no alternate for black than Qd2.

After Carlsen’s 44.Qe6, computer liked all black moves. Not a move loses for black! Grand Masters felt 44…Qa1 was the more accurate though. After move 47, Carlsen drew with repetition.

Nakamura now gives Anand a 30-35% chance to win this match. Four games are completed. Scores are even like last time. The difference being that Anand and Carlsen had drawn every single game in the first four of their Chennai match. Nakamura singled out Anand’s opening play with white in both game one and three as good.

Matches have a 50 v 50 chance due to the score. Anand’s fifth, eighth, tenth and twelfth games will be watched with interest by his fans in India and outside as he is making use of the white pieces well and showing good preparation. Carlsen will get a double white in game six and seven.