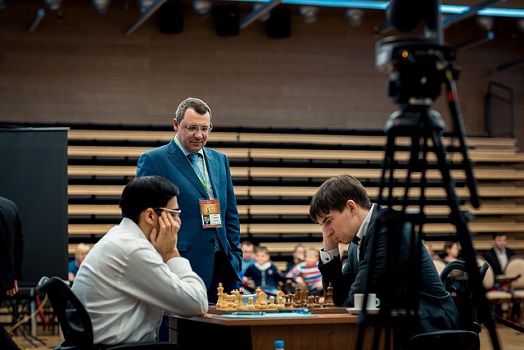 Former world champion Viswanathan Anand is set to prove his critics wrong. Some wrote off the champion after he lost to Magnus Carlsen in Chennai last November. Some even went to the extent to ask if he would be retiring. Anand had been steady and is well placed to win this FIDE Candidates Tournament in Khanty-Mansiysk in Russia.

In a double-edged Caro-Kanngame on March 27, Anand did not push much with white and drew Andreikin in 41 moves after repetition. Anand is on 7.5 points with three wins and nine draws in his 12 games. He leads by one points with two rounds still to go.

Anand plays Karjakin and Svidler in the last two games. One can naturally expect him to play extra cautiously. He needs a win or two draws to win this event and emerge as challenger to Carlsen. When he does, Anand might be the oldest at 44 to win the Candidates Tournament.

Top seed and world No.2 ranked Aronian drew Kramnik and is one point behind Anand with 6.5 points. He only has theoretical chances of catching up with Anand.