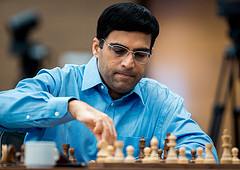 Former world champion Viswanathan Anand drew Vladimir Kramnik of Russia with ease in 31 moves from a Catalan opening, black side game in round eleven in Russia on March 26, 2014. Anand leads with seven points from eleven rounds. Three rounds remain to be played in this 8-player double all play all.

Anand has defeated Aronian, Topalov and Mamedyarov by identical 1.5-0.5 scores and drawn Kramnik 1-1 in completed games. He is still to play Svidler, Karjakin and Andreikin in reverse games. Notably, Anand is the only undefeated player in this contest. If Anand makes, three draws in the upcoming games, Aronian will require a near impossible 3/3 to better the Indian.

With the black pieces, Anand did not face any problem in equalising. After 31 moves they arrived at a rook and two pawn ending and decided to draw the game. Sadly, all the four games in round eleven ended in draws. Aronian was in a minor piece ending against Svidler. 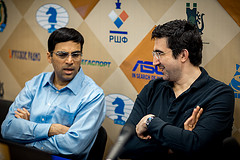 Anand is well placed to win this contest. The winner will emerge challenger to world champion Magnus Carlsen of Norway in a venue yet to be decided. It will happen later this year. Anand is playing at 2874 and is poised to gain his most rating from a single event in three years. 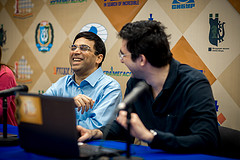