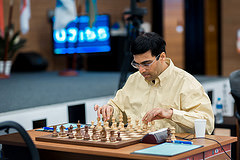 Former world champion Viswanathan Anand drew Shakhriyar Mamedyarov of Azerbaijan in the tenth round to keep his lead after ten rounds in the FIDE World Chess Championship Candidates Tournament at Khanty-Mansiysk, Russian on March 25, 2014.

Anand castled queen side against the Sicilian Najdorf of Mamedyarov. The repetition of moves are turned down by the black player after one stage but the game was drawn on move 30 as per the FIDE requirement.

Anand is playing at 2884, some 113 Elo above his rating number. He had fully recovered from the Magnus Carlsen match defeat. He will need four draws to win the events practically. He is well placed with three wins and seven draws in the competition. He leads with 6.5/10.

Kramnik, one of Anand’s challenger and favourite from the hosts, overlooked a simple tactic and dropped a rook for a bishop to lose to Svidler. The other Russians, Karjakin and Andreikin drew.

Aronian is in second place with 5.5 points, one point behind leader Anand. He drew Topalov with white after being in mild trouble. in the rook and bishop ending. The winner will challenge Carlsen for the world chess title. 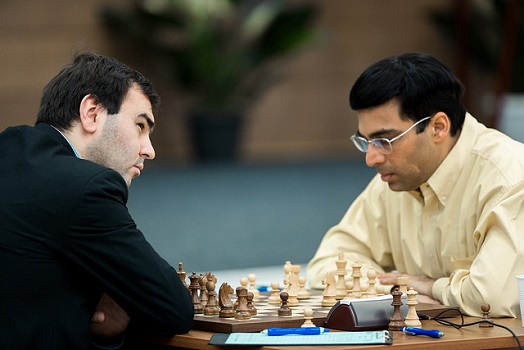