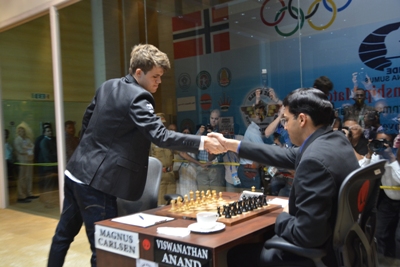 Anand Lets Carlsen Escape With A Draw
By Arvind Aaron

World champion Viswanathan Anand was impressive to get a pawn advantage in game three but in the time pressure, the presence of opposite colour bishops helped challenger Magnus Carlsen of Norway to escape with a draw after 51 moves.

Scores are level at 1.5-1.5 after this draw. “I missed a lot of actics and was nervous,” said Carlsen who refused to disclose the moment in which he was nervous. Anand said white generated plenty of play on the a-file and it was not easy for black to win the game.

Game three started with the first two moves from game one. Carlsen varied on move three from game one and forced the game into a different variation.

White was restricted to a small area. Black could make a draw if he wanted on move 23 by perpetually attacking the white queen. Anand played for initiative and by move 27, the white queen was placed behind the g2 bishop on h1.

White’s bold 28.e3 break looked dangerous and double-edged. Carlsen may have seen something which the computers and the experts had not foreseen.

For the time control, Anand’s time advantage quickly translated into a pawn advantage by move 33. With the white queen sitting on the edge of the board, spectators knew that Anand was calling the shots. 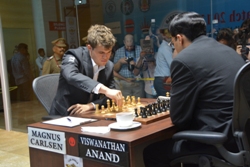 With the twenty-five percent of the match completed, nine games remain to be played in this Tamil Nadu Government sponsored FIDE World Chess Championship match that is taking place at Hyatt Regency Hotel in Chennai.

“I do not want to be drawn into politics, but the world champion deserves to be treated with respect,” said Carlsen when asked that officials did not receive him well in Chennai. FIDE Press Officer Anastasia Karlovich replied saying that Monday was a free day and not allowing Kasparov into the pressroom was not an issue.

Spectators had plenty of value for money in game three. Anand has the advantage of playing five white games in the remaining nine.

Both players said they did not meet or see Kasparov and the question of playing a fighting game on the day of his arrival here did not arise. Anand defended his decision to allow exchange of the second rook and reeled out variations in defence for white. 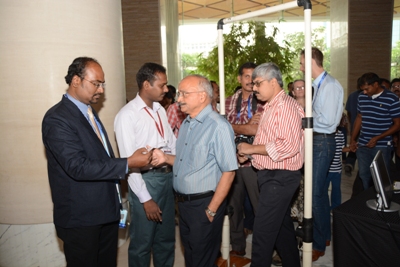 What is a Crore or a Lakh? A lakh of Rupees is INR 1,00,000. A crore is INR 1,00,00,000. So a Crore will be ten million. The term million and billion exists and are used in modern financial statements but in comon parlance only Lakh and Crore is used in India.

Former world chess champion (from 1985-2000) Garry Kasparov had come to Chennai for a holiday with his wife and was received by Ignatius Leong, FIDE General Secretary. Kasparov had formally trained Carlsen in 2009 at Croatia and since then the Norwegian gained rapid success in elite competitions. Carlsen also surpassed all-time high rating of 2851 earlier this year. In 2010, Kasparov helped Anand in the match against Topalov. Kasparov, it is learnt will be in Chennai to witness two games.

Kasparov attracted more media attention than the players. He was escorted into the playing hall by J.C.D. Prabhakar, President, AICF and D.V. Sundar, Vice President, FIDE.

As a surprise, more tickets were sold today than the two opening days. Kasparov was taken to the premium seats behind the Corporate Box seats but ahead of the Standard seats. On the last row of the Standard seats were Aruna Anand and the Anand team mambers. Behind them were the the standing spectators who enter into the hall for some time and leave. “About 20 seats were unsold today,” said Shrinidhi Sathiyanarayanan, who worked at the ticket counter.

“I like the ticket system used here,” said German journalist Stefan Loffler of Frankfurt Allgemeine. “The arrangements for the press here are super,” said the International Master, one of the many titled players covering this match. 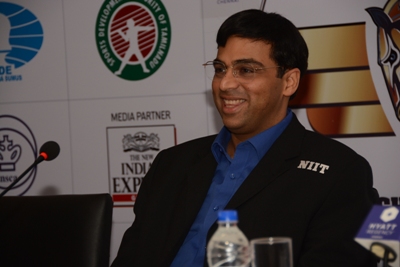 “Watching these world chess championship games live was an experience of a lifetime,” said Woman Grand Master Nisha Mohota of Kolkata. Many other woman players like Kiran Mohanty, Soumya Swaminathan were present to watch the games.

What are the players wearing? The players wear a regular trousers, sleeves shirt and a coat without a tie. Within 15 minutes they remove the jacket and wrap it around the back of the chair and continue the game. Anand has brought coffee to the table.

Excited at seeing so many video cameras, Carlsen has now started to get used to them. Both players are relaxed at the press conferences. May be this could change when we see decisive games.

Eminent international problemist C.G.S. Narayanan of Chennai is conducting a daily problem solving competition with attractive prizes. This is happening at the lobby of the Hyatt Regency Hotel.

The Norwegian delegation led by the Carlsen’s father and manager are always busy talking to the Indian and Norwegian media.