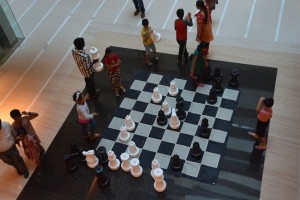 Both Players Impressive With Black
By Arvind Aaron

Free day provides a wonderful opportunity for the players to unwind and relax and get ready for the next game or the job on hand. The last two games have seen 115 fighting moves and Thursday is a free day. The Tamil Nadu Government sponsored FIDE World Chess Championship match is at balance on 2-2 after the first four games. Two-thirds of the games, or eight to be precise are left to be played.

In the world championship matches, usually players eat at different restaurants and taste different food for their various taste buds. Anand has announced his team and there is nothing much to worry on that account on the free movement of his team. However, Magnus Carlsen of Norway has not announced his team and will have to protect that from being revealed.

The match has opened up earlier than it has when one can compare it with the Anand v Kasparov matches of 1995 at New York where the first eight games were drawn. Anand is holding on well with the black pieces and should be repeating the same Grunfeld defence. Carlsen is adopting the ‘jump’ strategy that means accepting Anand’s strength in the opening. By this strategy, it is clear Carlsen had to memorise or study more lines.

If this strategy is followed, Carlsen could try another line in game six when he plays with the black pieces again. Anand had played the Grunfeld defence for the first time in the Candidates Match against Oleg Romanishin of Ukraine at New York in June 1994. Perhaps both players have invested more time preparing with the black side than with the white that the side which moves first has not been in the saddle as it should be.

“Chess is an equal mathematical puzzle,” said former world champion Vladimir Kramnik in the past. So players tend to become more defensive in one-to-one matches and that could be the reason for the black side to have the upperhand.

About 18 years back, Jeroen Piket, a Dutch grandmaster said many chess players try to do too many things or line up many things for the rest day and in the end, it becomes a more taxing day on the body. Therefore a rest day should be a rest day. Top professionals like Anand, Carlsen know all of this very well.

Carlsen said he is unlikely to watch a Tamil or Indian movie. He has been in the gym quite regularly at the hotel. Norwegian delicacies are available on the ala carte menu and there is a cook travelling with him. Carlsen has said he has been treated very well by the organisers. Studio 1 next to the Media Hall is for the Norwegians and family members of Carlsen are also in and out of it following the match.

The organisation of this match by the Tamil Nadu State Chess Association has been smooth and wonderful. The planning has been spot on and officials have taken the game to new heights with the support of the Tamil Nadu Government. The players, spectators, and the chess fraternity are having an enjoyable time at the Hyatt Regency Hotel.

The games are followed on Doordarshan Sports in India and around the world and by NRK in Norway. On the internet one can see live games on http://chennai2013.fide.com Besides, there are local and national television and radio offering quick and in-depth coverage of the matches. The official site offers live coverage on iPad, Android, live video on You Tube, and the PGN game display is also supported by live video streaming. The press releases are in text, photographs and also audio for radio channels. No previous world chess championship had these amazing arrangements.

“You have made super conditions for the match,” said Stefan Loeffler, German International Master who visited Mamallapuram, 60 kms south of Chennai in the previous free day. The idea of tickets for those who pay and standing at the rear of the hall for those who cant pay are great ideas. Having made a hotel booking elsewhere, Loeffler understood that he could move to the official hotel only for Rs.5,500 per day and decided to come in.

Games five and six should bring in the most spectators as the score line is in balance. The players are fighting long games and going for the initiative when provoked. On Carlsen not accepting the draw offer at move 40 in game three, that is the way he plays. Playing until the verdict is known on the board is his strategy. They drew eleven moves later with an opposite colour bishop each standing on the board. Officially a game can be won by either side when each side has an opposite colour bishop. If one side loses the bishop, the game will be then drawn due to insufficient mating material!