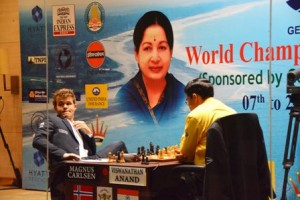 Carlsen Extends Lead After Another Anand Blunder
By Arvind Aaron

World No.1 Magnus Carlsen of Norway extended his lead to 4-2 after world champion Viswanathan Anand lost a rook ending in game six that looked drawish at the Hyatt Regency Hotel in Chennai.

The game was sailing smoothly towards a draw when Anand’s mistakes in the second time control decided the game in favour of the 1990 born Norwegian.

Anand said 57 Rc8 was a draw. His 60th move, the last in the second control was another mistake after which black won in 67 moves without much trouble. “Today is a heavy blow, I wont pretend otherwise,” said Anand after the game.

Score at the half-way mark is 4-2 and six more games remain to be played. Sunday is a free day and play resumes on Monday with the seventh game. Anand will play white yet again. Carlsen will get white in the eighth, tenth and twelfth games. The event is sponsored by the Tamil Nadu Government.

The sixth game saw Anand continuing to open 1.e4 with the white pieces. That was the move he learnt from his mother who introduced him to the game at the age of six. Anand used 1.d4 with a mere surprise value and for options sake. His bread and butter option is however 1.e4. 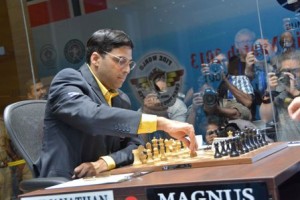 Repeating the king pawn, Anand faced the Ruy Lopez again from Carlsen. Anand avoided the Berlin variation and chose one of the anti-Berlin variations. Carlsen did not find much difficulty in equalising with the black pieces.

After the last set of minor pieces were exchanged off, black was heading for a sweatless draw. Anand’s advantage of making the opening move had far from vanished.

On move 38, in a queen and rook ending, Anand sacrificed a pawn. The idea will be to exchange queens and enter a level rook ending.

The quiet game might have disappointed the spectators who had come in large numbers despite wet and windy day. Also, the lobby area of the hotel where the Chess Solving took place looked crowded. Yesteryear tennis star Vijay Amritraj was among the spectators.

After move 41, the players were in a rook ending with Carlsen enjoying an extra pawn. Although best play might be draw, white getting into this ending perhaps was not necessary.

The rook and pawn ending looked level for most of the game. After move 54, Carlsen had kept his one pawn advantage but being a doubled rook pawn, draw chances looked bright.

In the 57th move, Anand lost a crucial tempi that decided the game. Later, his mistake on move 60 sealed the win for black side.

Asked if yesterday’s result had a bearing on this game, Anand said, “yes probably.” Asked why he gave a pawn on move 38, Anand said, “What can I say, somedays go like that.”

All of Saturday’s tickets had been sold online and there were no tickets available over the counter today. The ticket counters were open only to sell for game seven and beyond.

In the Chess Solving competition held at the lobby of the Hyatt Hotel on November 16, 2013, International Master Ramnath Bhuvanesh won it ahead of 67 other solvers. Grand Master Pravin Thipsay of Mumbai distributed the prizes. It is organised by International Problemist C.G.S. Narayanan.

Seventy-one players are leading with two full points in the 318-player State Level Open Chess Tournament organised by the Tamil Nadu State Chess Association. It is part of the FIDE World Chess Championship festival and is played for the Chief Minister’s trophy.

The top seed is International Master V.A.V. Rajesh. This event runs from November 16-18, 2013. It has a first prize of Rs.100,000. Each of the 32 districts are allowed ten entries, eight of them will be men and two ladies. The chief arbiter is R.K. Balagunasekaran of Mannargudi.

The second and third seeds are M Kunal and V Haribalu. They have also won both their games. Seven rounds remain to be played in this three day event.