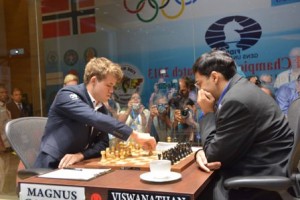 World No.1 Magnus Carlsen of Norway snatched a crucial lead after world champion Viswanathan Anand made a single mistake on move 45 to lose on move 58. Carlsen has taken a 3-2 lead after five games in the FIDE World Chess Championship match that is taking place at the Hyatt Regency Hotel in Chennai.

Norway room applauded the victory with clapping of hands and shouting when Anand resigned. “It feels good to break the deadlock and take the lead,” said Carlsen.

“The rook ending was very difficult,” said Anand who blundered on move 45. However, Anand said his “34…Rd4” was the cause of all the problems for black.

The fifth game started with Carlsen making the first move. There was a mild surprise waiting for him. Anand went for a variation of the Semi-Slav which he had played successfully since defeating Kramnik with the black pieces in Belgrade in the Investbanka Tournament, 1997. 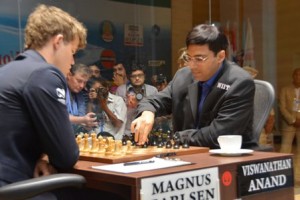 Carlsen castled queen side and allowed early exchange of queens. Using double bishops, Anand was hoping to equalise and make a draw fairly easily. However, with an intricate move on the 19th turn, white was able to keep the pressure on black.

After 23 moves, the players were in a double rooks and same colour bishop ending. Black’s king side rook was not developed early and that factor offered Carlsen a small but unseen advantage.

“Tricky, but under control,” was how former world junior champion Abhijeet Gupta described the game after 36 moves. In the second time control, Carlsen won a pawn on move 42 but black’s pieces were active and had sufficient compensation.

It was difficult to see a promising continuation for white but that was how Carlsen played his games. Many of his wins in his career are due to mistakes from his opponents. Chess being an equal mathematical puzzle, is won by games due to mistakes of players.

Black’s 45…Rc1+ was not the most accurate and the advantage went to the white side. Sadly for Anand, Carlsen pressed home a big advantage and won on move 58.

“It is not about who wins first but who wins the match,” said Carlsen. Carlsen said he took time in the opening to get used to the unconventional position. He said white had an advantage with strong bishop and better pawn structure.

Anand had come from behind in the last two matches and his fans need not lose heart. For Saturday’s game all seats are taken. Anand will play white in the next two games and can use it to neutralise the deficit.

Seven games remain to be played in this best of 12 series. Anand will have the advantage of making the first move in the next two games. The first player to reach 6.5 points wins the Rs.14 Crore prize money event. Sixty percent goes to the winner and the remaining 40% to the loser. The total budget of Rs.29 Crores is funded by the Tamil Nadu Government.

The two players are also endorsing products when they come to the playing and press room for post game analysis. Anand had NIIT, Complan and Crocin on his shirts in various of his games. Carlsen also endorses products like Verdens Gang AS, a media company and Arctic Parallels.

Former world under-12 champion Karthikeyan Murali of Chennai won his fourth title in five appearances at the chess solving competition organised at the Hyatt Regency Hotel this evening. This competition is organised by the award winning International Chess Problemist C.G.S. Narayanan of Chennai. It happens on all world championship game days at the lobby of the Hyatt Regency Hotel at 4 p.m.