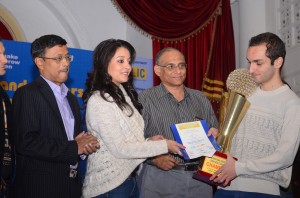 GM Samvel Ter-Sahakyan of Armenia emerged as the champion with 7.5 points after the conclusion of the final round of the SREI International Grandmaster Chess Tournament at Town Hall on Saturday. 3 GM norms and 3 IM norms were made in this 10-round GM tourney which was organized by Dibyendu Barua Chess Academy and Allsport Foundation.

In a closely fought meet, there was , in fact, a five-way tie for the top slot and Samvel Ter-Sahakyan edged out IM Mihail Mozharov of Russia by half Bucholz tie breaking points to seal the 1st prize of Rs.2 lacs.

In the final round, Samvel Ter-Sahakyan went all out for an attack, against second seed, the Russian GM Ivan Popov’s king in a blood-thirsty battle in a Sicilian defence. Popov gave his queen to thwart Ter-Sahakyan’s attack and had 3 pieces for the sacrificed queen, but accepted a draw on the 33rd move as his king was open in the centre and subject to perpetual checks.

10th seed, IM Mihkail Mozharov , who needed a draw for his GM norm , predictably drew his last round game against GM Levan Pantsulaia of Georgia to secure his GM norm and the second prize of Rs.1.5 lacs.3rd seed, Levan Pantsulaia also scored 7.5 points was placed 3rd while FM Tigran Petrosyan of Armenia and Azer Mirzov of Azerbaijan were placed 4th and 5th respectively. 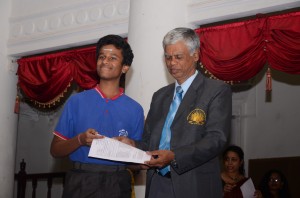 The find of the meet, was clearly, FM Tigran Petrosyan , who outplayed the Georgian GM Tornike Sanikidze to achieve his GM norm. The Indian IM Murali Karthikeyan, also achieved his GM norm by getting the better of top seed, GM Surya Sekhar Ganguly, who had a forgettable tourney and was placed 30th in the final ranking.

Siblings, Nr Vignesh and Nr Visakh , who were already assured of the IM norms yesterday, went down in the final round against Drazic Sinisa of Serbia and Hovik Hayraptyan of Armenia respectively.

City based Women grandmasters Mary Ann Gomes and Nisha Mohota were declared as the best and the second best women players of the meet. Both scored 5 points, Mary Ann was placed higher and received Rs15,000/- while Nisha got Rs 10,000/-.

IM Prasanna Rao and V Karthik were adjudged as the best and second best junior players on the basis of their points.