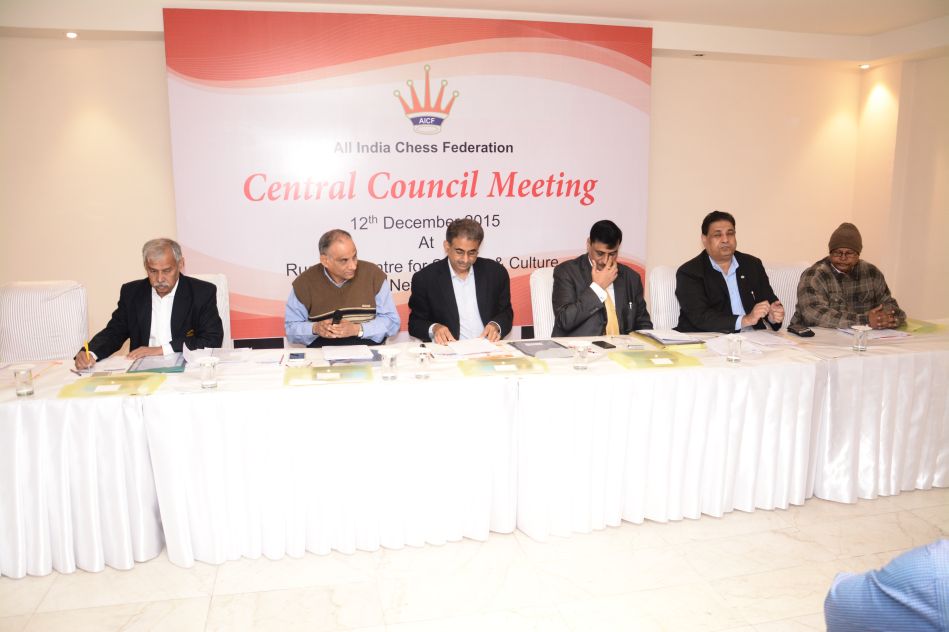 Some of the important decisions taken by the Central Council of the All India Chess Federation which met on 12.12.2015 is give below.

Dress Code to be made compulsory for the all the players participating in all the National Championships. To begin with, all the State Associations are directed to give two T-Shirts with their Association logo in the front and the name of the State at the back printed prominently. Players without this will not be permitted to participate.

The report of the Disciplinary Sub Committee on match fixing during the National Under13 Chess Championship 2015 held at Gurgaon, from 30th August to 06th September, 2015 was accepted by the Central Council. Accordingly Neelash Saha was stripped of his gold medal. Both Aronyak Ghosh who conceded a point to Neelash Saha to help him win the title and Neelash Saha are barred from participating in any National Championship or FIDE rated tournaments or the State/District Championships till 01st April, 2016. Further both can not represent the country till 31.12.2016.

Bhubaneswar to be the venue for the World Junior Chess Championship from 7th to 21st August, 2016.

The AICF felicitates medal winning members of the Indian team at the World Youth and Cadet Chess Championships 2015 held at Greece. Rs.6 lakhs was disbursed among the Eleven children with Rs.75,000, Rs.45,000 and Rs.30,000 for the Gold, Silver and Bronze medallists respectively.

A thrust to be given to the preparation of the Indian Women team for the Chess Olympiad to be held at Baku in 2016. A committee consisting Mr.Bharat Singh, Mr.R.M.Dongre, IM.Vishal Sareen, IM Sekhar Sahu, Mr.V.Hariharan along with GM. R.B.Ramesh was formed to chalk out the modalities for the above.

a. FIDE Rated tournaments: In future FIDE rated tournaments conducted for 5 days and below, the organisers cannot charge more than 0.5% of the total prize money as entry fee. For tournaments of 6 days and above, the old regulations continues.

b. Since July 2014, FIDE has started levying 1 Euro from each player from all the FIDE Rated tournaments. AICF will allow upto 150 players without collecting this levy from the organisers. However, over and above 150 players, the organisers shall pay at the rate of Rs.100/- per player to the AICF. The old Rule will be in force for all the tournaments which have been approved. New Rule will come into effect for all future tournaments.