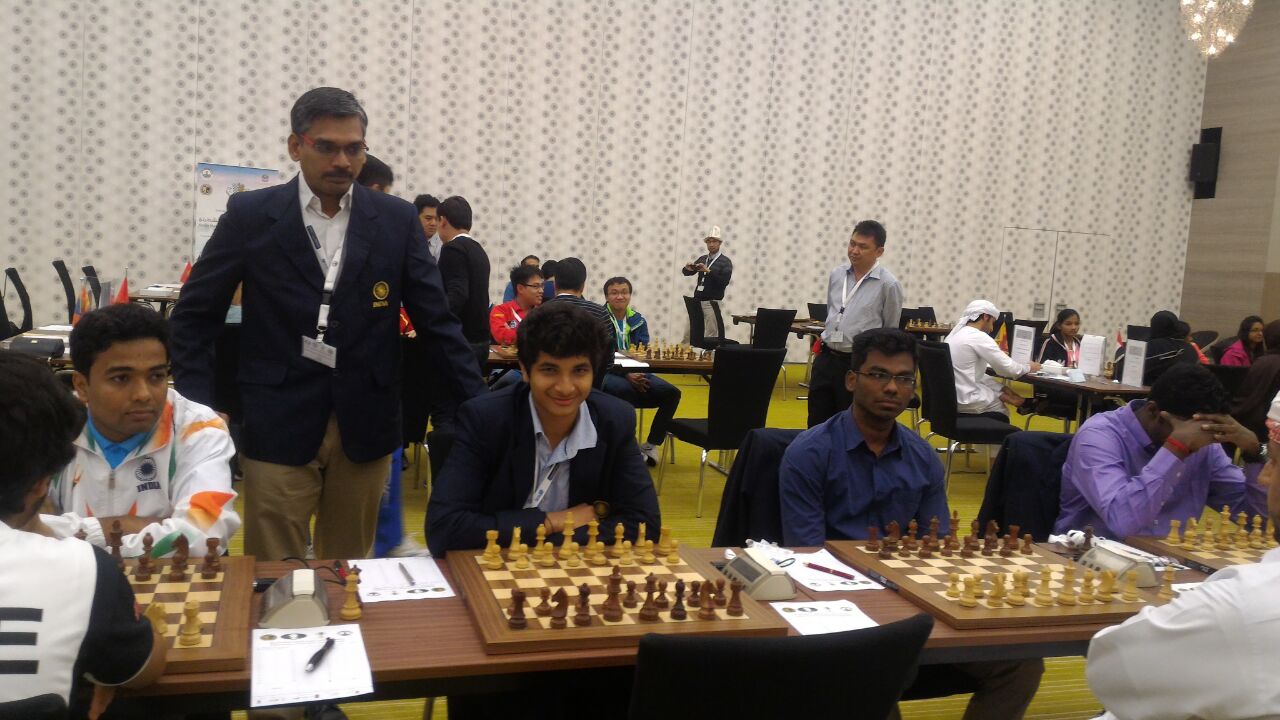 India beat China in the 5th round of Asian Nations Cup 2016 being held at Abu Dhabi, UAE and snatched the lead from China. China were leading with all win record in the tournament and India was in joint second position having drawn their 2nd round match against Mongolia.

Vidit Gujrathi was the first player to win the game for India with the black pieces against out of form child prodigy Wei Yi. Vidit surprised Wei by playing e5 as black on move one which he has never done before. Wei took his time in chosing the opening set up and slowly got into terrible time trouble when Vidit was still in his home preparation. Wei did not put a good fight and surrendered a pawn in the early middle game and Vidit launched a king side attack with timely f3 break and  Wei gave up the game being 2 pawns down and his King coming under attack.

On the top board, Adhiban equalised comfortably playing the Slav defence which got transposed into kind of Queens gambit accepted position with white having an isolated d4 pawn. Adhiban played the opening phase quite solidly and neutralised Bu’s initiative. Bu realising that Wei has already got into trouble with Vidit on the 3rd board, decided to sacrifice a pawn for unclear compensation. Adhiban took the pawn and won another pawn and took the game into opposite colour bishop ending. Adhiban overcame some anxious moments by finding the accurate moves and won the game, making it two wins with black pieces.

Sasikiran had an advantage right from the Sicilian Najdorf opening from white pieces and even won a piece by playing some unorthodox moves in the opening which completely confused his opponent. From here onwards, both the players ran short of time and Sasikiran allowed some counterplay for black and had to settle down for a draw by giving back his piece for 2 pawns.

Sethuraman got a very comfortable position right out of the opening in Petroff defence against Wang Yue as a result of good opening preparation. He managed to win a pawn in the ensuing endgame but had to give it back to reach an equal ending with Rook and bishop against Rook and knight. In this stage Wang Yue managed to put Sethuraman under pressure and Sethuraman blundered in an equal position to loose a pawn and got into a lost king and pawn ending.

With this win over current Olympiad, World team Champions China, India is in sole lead position. India will need to win all the remaining matches to ensure they win the title without a tie.
In the 6th round,India faces Iran.