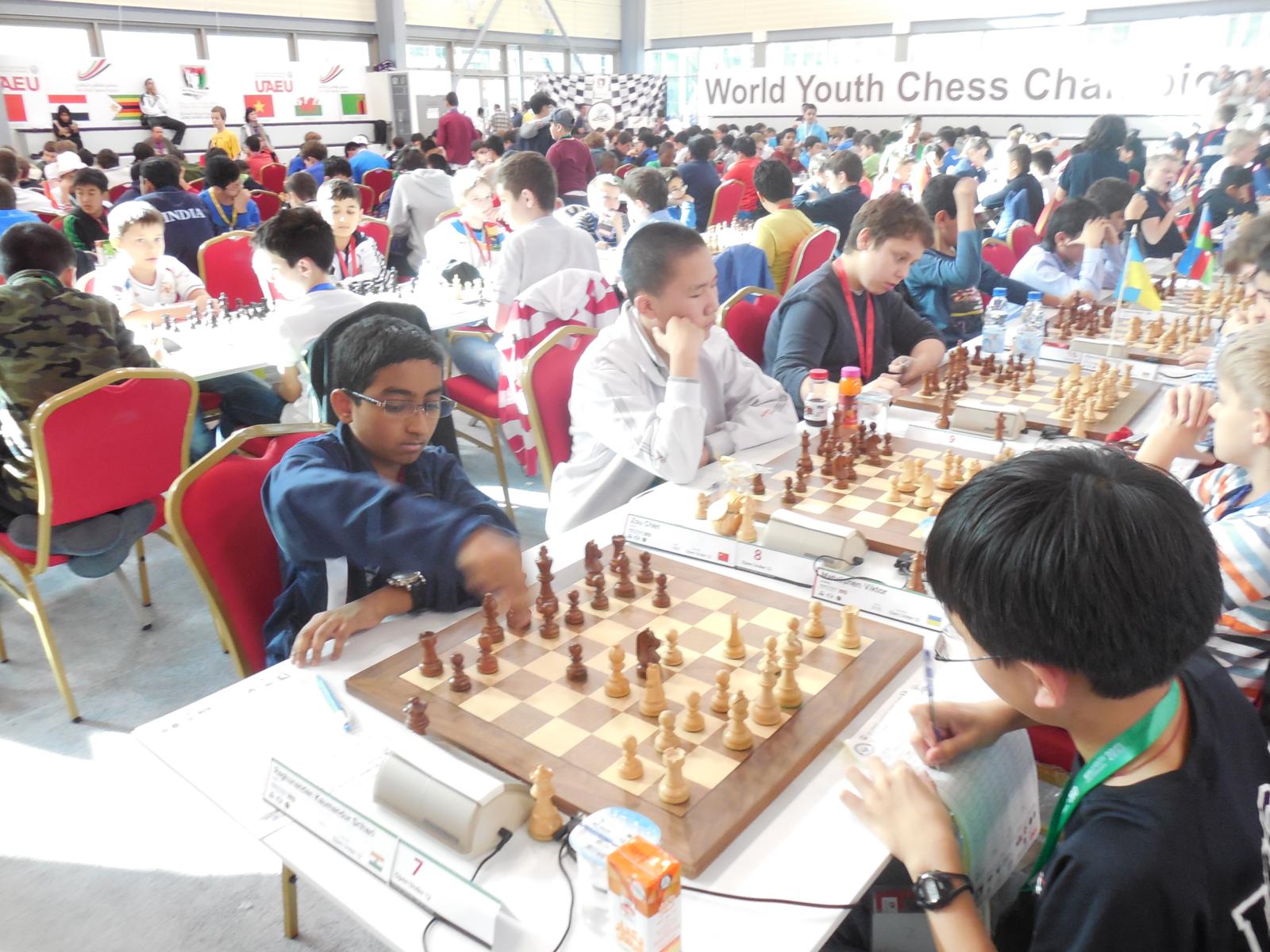 India Is Dominant In Under-8 At Al-Ain
By Arvind Aaron
India is dominant in the Under-8 sections in the World Youth Chess Championship after three rounds at Al-Ain in the United Arab Emirates on December 20, 2013. Three players in Under-8 and three in Under-8 Girls are leading with eight rounds still to be played. The crucial day when India goes ahead of the European rivals are the double round days which is coming very soon. Overall, India has seven girls among the leaders and five boys.
If there are 1850 little boys and girls engaged in one activity inside one hall, the gentle activity is called chess.
In the Girls’ Under-8 section, among the eleven leaders are three Indians. Divya Deshmukh, Bhagyashree Patil and Gunjal Chopdekar have full three points.
Sixth seed, C Lakshmi is among the five Asians who are in the overall nine leaders in the Girls Under-10 section. Other Asian leaders include Bibissara Assaubayeva (Kaz), Xiao Zhang (Chn), Khuslen Tuya (Mng) and Motahareh Asadijoujadeh (Irn).
In the Girls under-12 section, two of the eleven leaders are from Asia. It includes R Vaishali of India. They have full three points.
Tejaswini Sagar is jointly leading the girls’ under-14 section with full three points. Five of the ten leaders are from Asia. They include Rita Yagi (Syr), Bakhora Abdusattorova (Uzb), Tejaswini Sagar (Ind), Lan Yao (Chn) and Mobina Alamdari (Irn). They have three maximum points. UAE is making life easier for Asians to dominate while playing at near home.
Four players, Sarasadat Khademalsharieh (Irn), Xing Hong, Tianlu Gu (both Chn) and M Mahalakshmi (Ind) are among the ten leaders in the Girls’ under-16 section. Mahalakshmi is a former under-14 champion of last year.  Top seed, Dinara Saduakassova of Kazakhstan is the lone Asian leader in the girls’ under-18 section. Four other players are on the same points as her.
Boys/Open Section
In the Open under-8 section five of the 16 leaders are from Asia. It includes Praggnanandhaa, Ruhaan Mahindru, Manthan Datta (all Ind). India can certainly expect medals in this section although it is still early days to talk about medals.
Six players from Asia are among the 12 leaders in the Open under-10 section. They face the other six in round four with the white pieces in an interesting Asia v Rest pairing.
Four of the 12 leaders after three rounds in the Open Under-12 section are from Asia. It includes K.S. Raghunandan (Ind), our title hope.   Five of the 16 leaders in the Open Under-14 section are from Asia. It includes Yan Liu, Di Li (both Chn), Xiangyi Liu (Sgp), Saparmyrat Atabayev (Tkm).
Three out of nine leaders in the Open under-16 section are from Asia. They are: Sayantan Das (Ind), Zhanat Saiyn (Kaz) and Tuan Minh Tran (Vie).  Asia does not have leaders in the Open under-18 group. However, three players, two from Iran and one from China are in the second spot on 2.5 points.