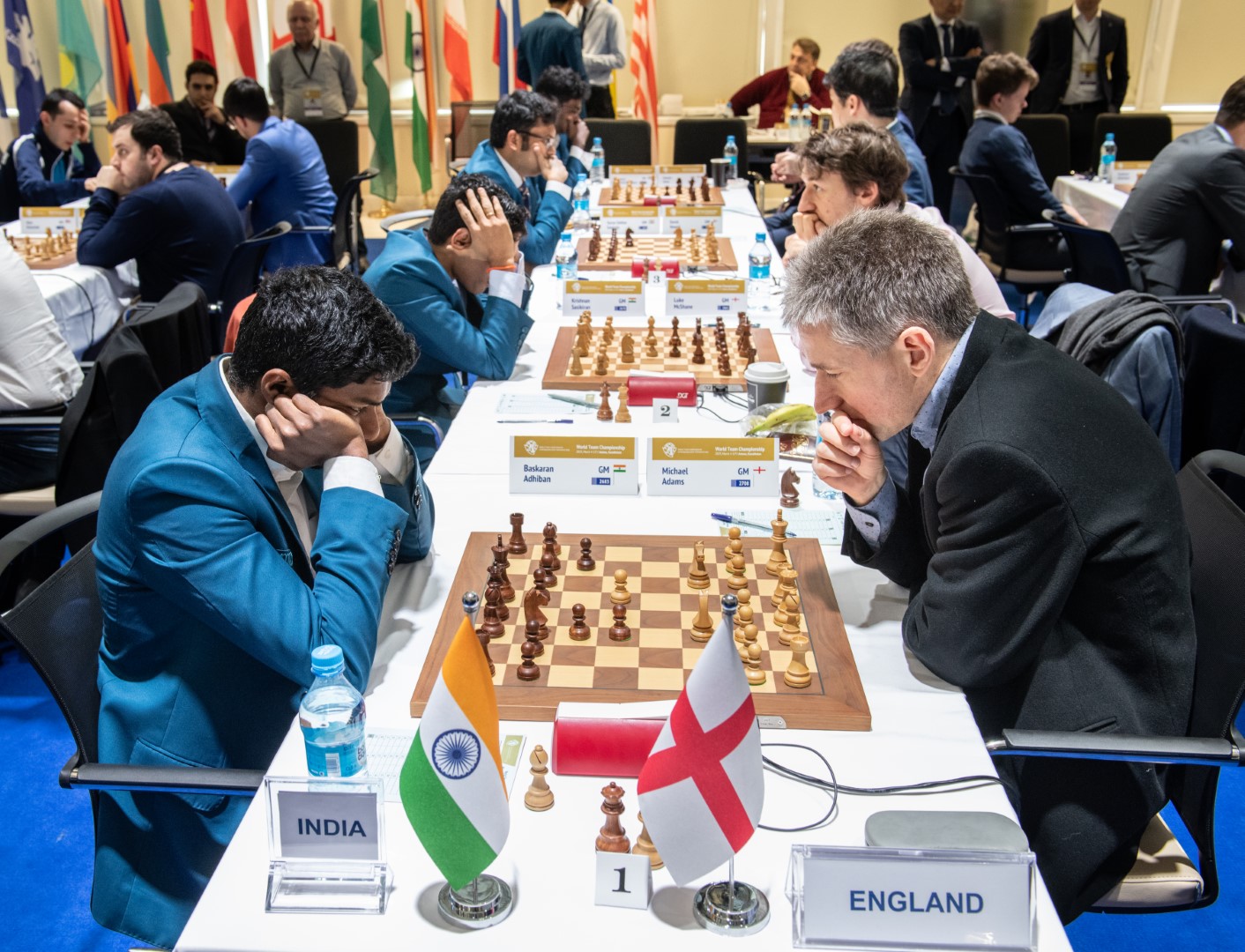 India beat Egypt 3.5-0.5 on a very tense day. The winning margin doesn’t convey the whole picture. GM Ganguly was the first to get an advantage against IM Adham Fawzy. However, despite playing flawlessly, his opponent’s resistance and the complicated nature of the position meant that the conversion took nearly four hours. The win put India 1-0 up. 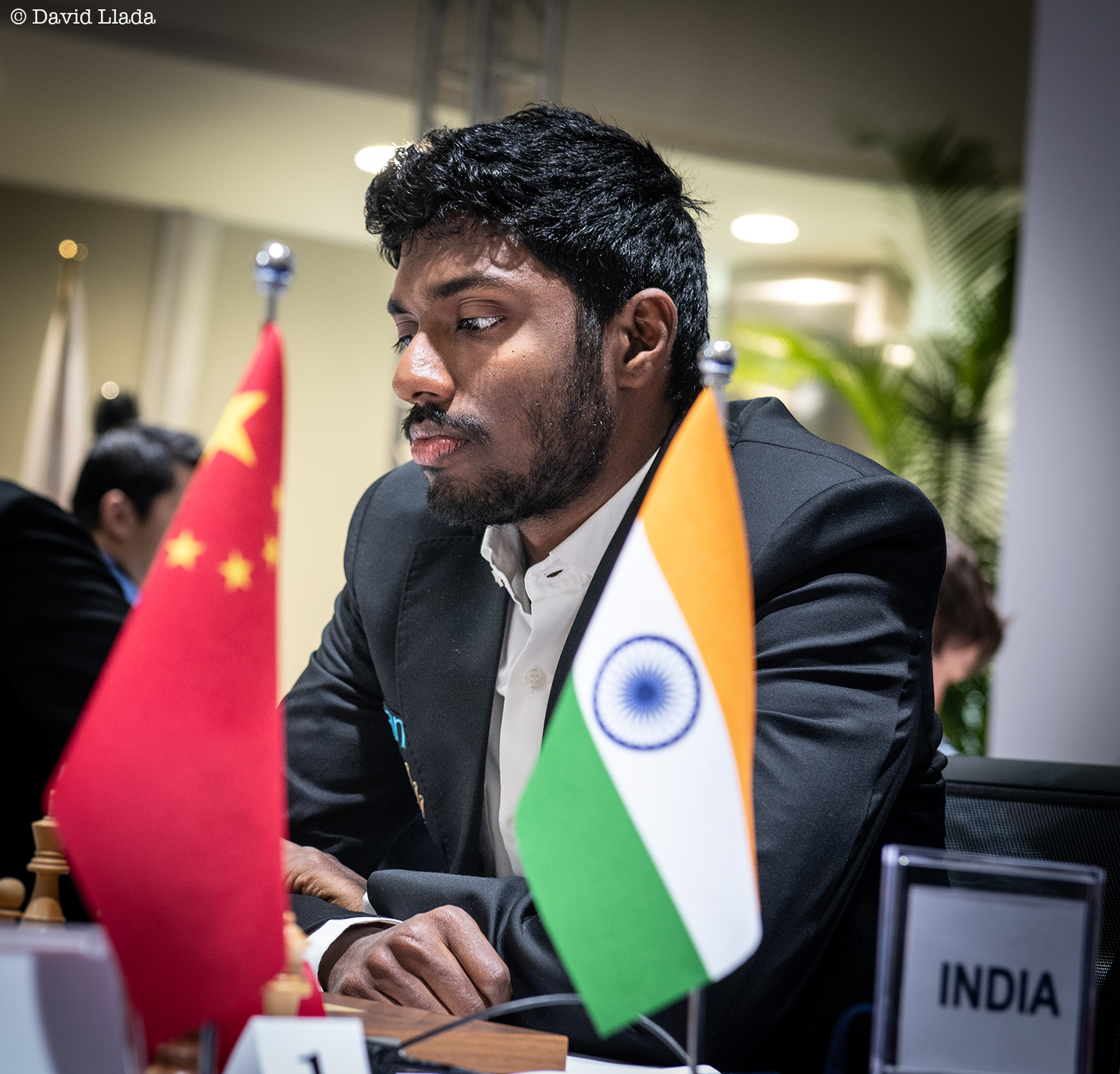 On the 1st board, GM Adhiban continued his winning ways. The latest victim to fall to the Hound of Baskarvile was GM Amin Bassem. Adhiban got a better position from the opening and never relented the pressure.

On the 2nd board, GM Sasikiran had a huge advantage against GM Adly, whilst GM Aravindh was struggling against IM Abdelnabby. However, prediction is a very tricky business. The tables turned several times on board 2, ultimately ending in a disappointing draw for GM Sasikiran, who played an excellent first half. On board 4, Aravindh showed excellent resilience, defending a bad position in the middlegame. He got generous help from his opponent as well, and turned the tables around to round off a comprehensive 3.5-0.5 win.

India drew 2-2 in an evenly matched encounter against China. GM Adhiban and GM Sethuraman couldn’t get much with White pieces against GM Ding Liren and GM Wei Yi respectively. When they saw that GM Ganguly was winning against GM Yu Yangyi on board 2, they bailed out and took a safe exit to ensure the team at least 2 points.

GM Ganguly’s game went through many unexpected twists and turns. He obtained an excellent position out of the opening, he was coasting towards victory on the middlegame. Having spotted a brilliant finish, he pounced on it with second thought, only to realize after a few seconds of thought that he had missed an intermezzo, Rxg6+. This was a very difficult moment for him, which took several minutes to process and accept. However, he regained his composure on time to convert a still winning position in an impeccable way. With his second win in a row with Black, he gave India a 2-1 lead. 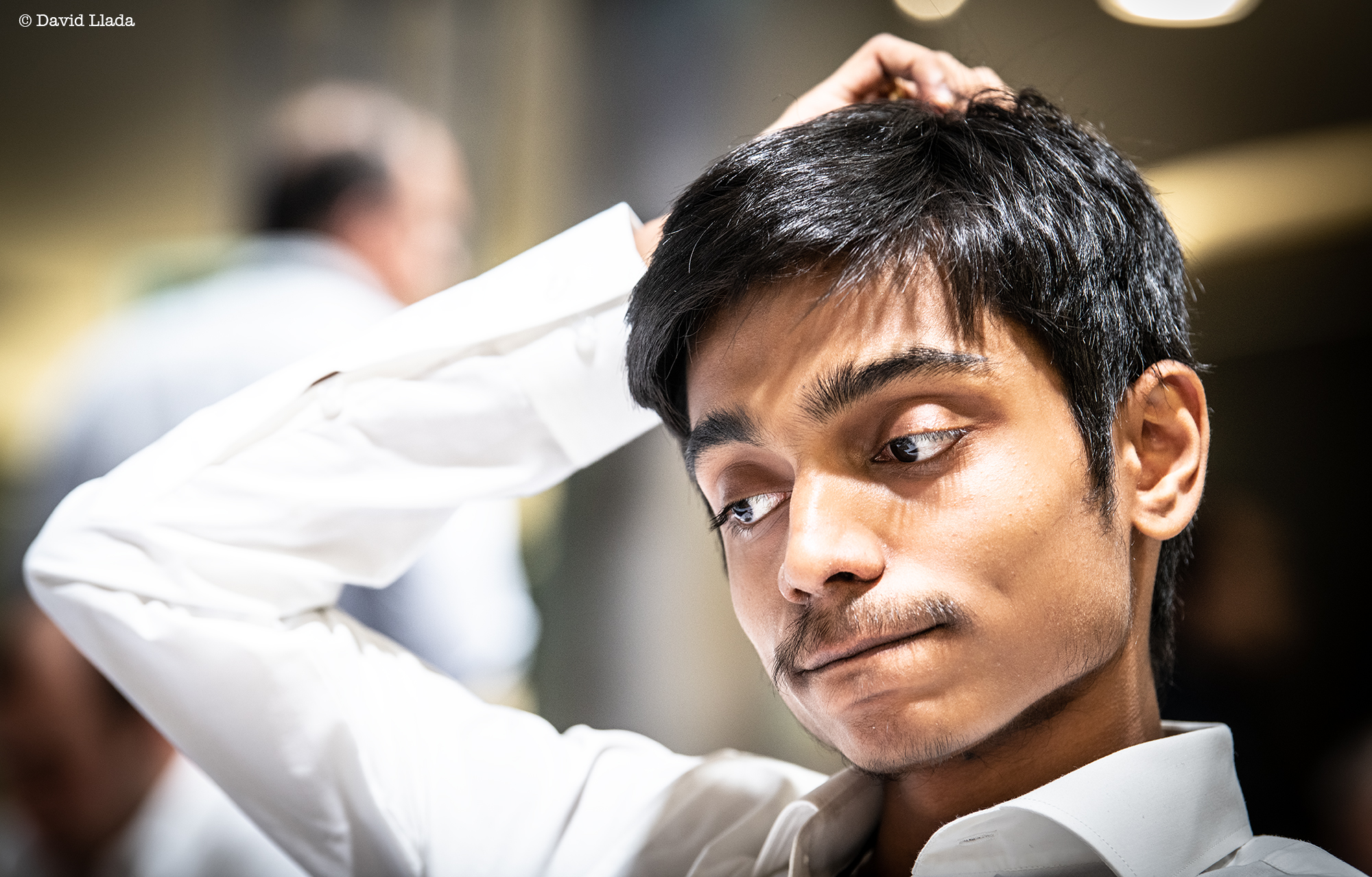 However, victory eluded India by a whisker, as GM Bu Xiangzhi showed excellent technique to ground out a technical victory against the young 19 year old GM Aravindh Chithambaram. GM Aravindh showed excellent resilience and fought through all the way, but was unable to save the game despite his best efforts.

India drew 2-2 against England in a topsy-turvy affair. GM Sethuraman was the saviour this time, continuing his winning streak against England from where he left in the Baku 2016 Olympiad. With comfortable draws on board 1 and 3 by GM Adhiban and GM Ganguly against GM Adams and GM Howell respectively, things looked good for India on the remaining boards.

However, GM Sasikiran had one of his rare bad days as he lost from a pretty even position. While there’s not much to write about the game except it being an anomaly, one has to remember that form is temporary, but class is permanent.

With India trailing down 1-2, it all boiled down to the game between GM Sethuraman and GM Gawain Jones on the 4th board. GM Sethuraman got a pleasant advantage right from the opening and kept piling on the pressure. GM Jones also had one of his bad days, as he didn’t resist in the best way possible. Once GM Sethu got an opening, he didn’t require a second invitation to assault.

All photos by David Llada