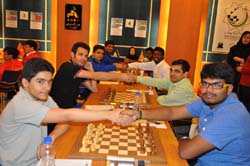 India defeated China 2.5-1.5 in the fifth round to lead the Asian Cup of Nations team event under standard time control at Tabriz, Iran on May 25.

Krishnan Sasikiran, our mainstay in team events, played the key role in India’s victory. On board two, he defeated the world junior champion Yu Yangyi with the white pieces after Sethuraman (board 1), Negi (board 3) and Lalith Babu (board 4) had drawn their games.

India had rested B Adhiban who is registered to play board 2. Sasikiran who had been registered for board three played on board two and won. 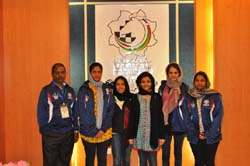 India leads with 11 points after six rounds with a draw against Vietnam and wins against all other nations. China with a stronger team in Elo are in second place with ten points.

India have to play Iran ‘A’, Iran ‘B’, Sri Lanka and Jordan and have a good chance of retaining the title they last won in Iran some years back.

In the women’s competition, China leads with four wins and India is in second place with three wins and a defeat to China. It is a six team race and one rounds remain to be played.