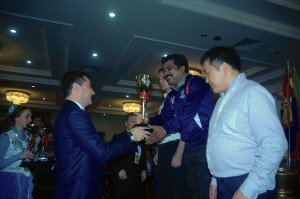 India, hosts Uzbekistan and Mongolia took the top three places for the best overall showing at the Asian Youth Chess Championships that concluded at Tashkent on June 28, 2014.

In the classical event, despite the last round jitters, India won one gold, two silver and three bronze in classical chess. Sanskruti Wanhhade won the gold medal for India in the Under-8 girls section. Ram Aravind (under-12 Open) and Khushagra Mohan (under-10 Open) won silver medals. Praggnanandhaa (under-10 Open), Aditya Mittal (under-8 Open) and Ananth Ramdass (under-6 Open) won bronze medals.

All our top board players, N Priyanka, Mridul Dehankar, Ananth Ramdas who were leading the tournament lost their last games. All the three girls who were leading lost the last round and even went out of the medals tally. Even our gold medal winner Sanskruti lost her last round but had the fortune of a one point lead!
Picture 1: Indian team captain T.J. Sureshkumar receiving the trophy for coming first in the overall performance.
Picture 2: Captains of India, Uzbekistan and Mongolia at the podium.
Picture 3: Indian team pose with medals at the podium. 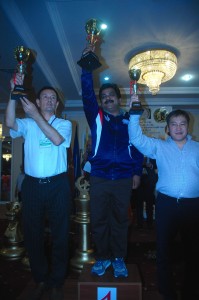 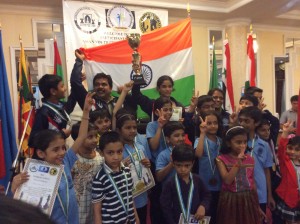