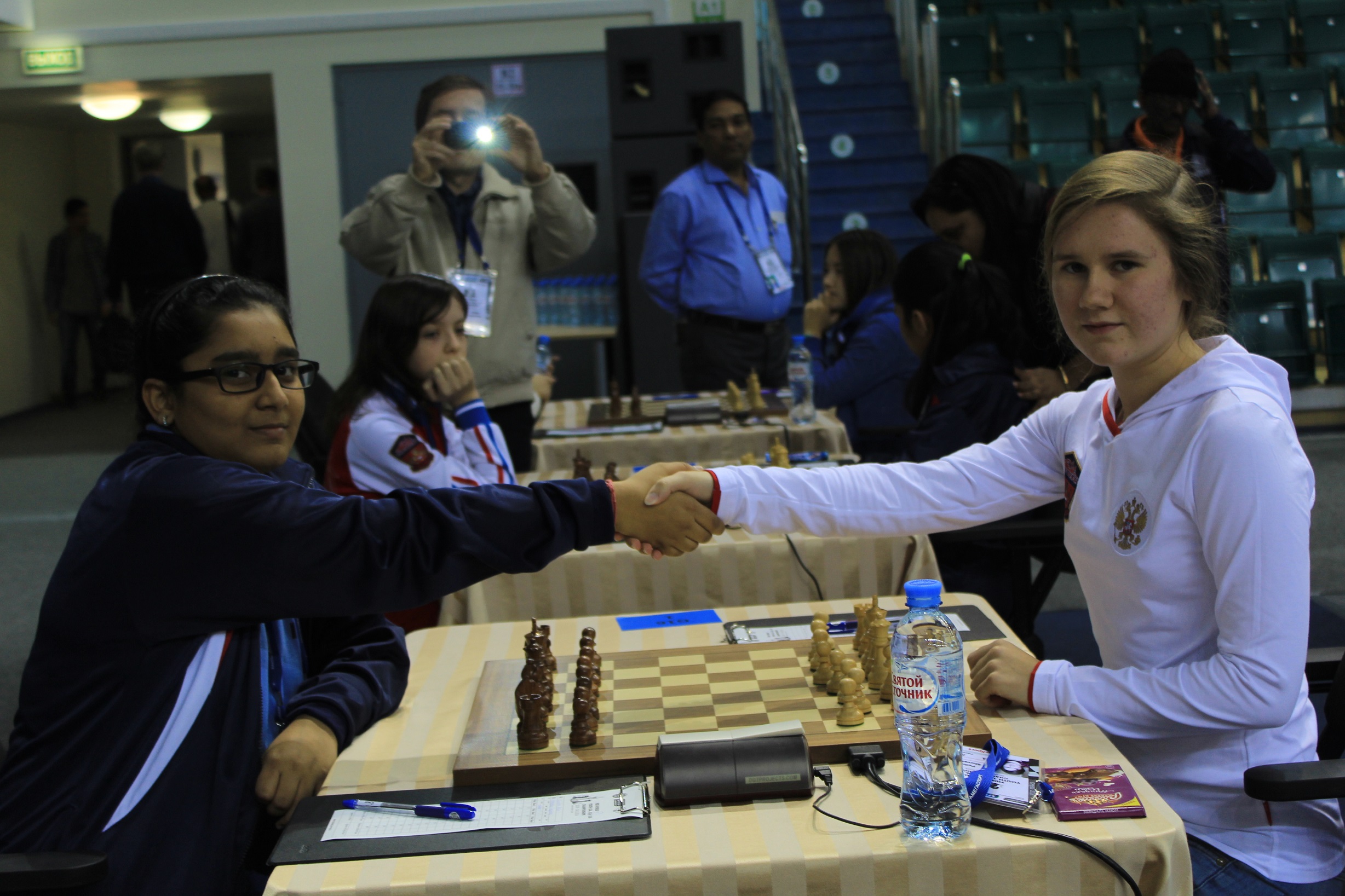 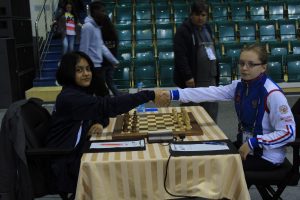 After 6 rounds of trending results, Indians fortified their positions by reducing the total number of losses to 3 compared to a 7 in the previous round. In round 7, team recorded 6 wins, drew 9 games and suffered 3 losses. Though there have been losses and draws by key performers, the team buoyed their position over all in the arena filled with highly rated opponents.

Saina showed real grit to hold Solozhenkina from black pieces today and undoubtedly was the star performer today. Holding a player who is much experienced and 300 elo points above is quite a sensational performance. Saina was in an aggressive mood and countered Solozhenkina’s King pawn opening with the sharpest Sicilian Dragon opening. The readers may recall that Sicilian Dragon is the most feared system from black and not without it’s merits Former World Champion Garry Kasparov had included it in his repertoire against his contest with Grandmaster Anand! Saina’s game didn’t go along the popular Yugoslav variation but was played by one of the side lines where most of the pieces are cluttered in the center and there is no real chance for either side to launch an attack on enemy King. As the game progressed, pieces got exchanged at regular intervals and the game was converted into an endgame where both sides had Rook, Bishop and 3 pawns each. The interesting feature of this endgame was that the pawns were in opposite sides – White had on the Queen side while Black’s were on King side! It was a very well fought endgame and both players matched their wits evenly. Ultimately, when white found her King trapped in the corner and no headway for the lone pawn a peace treaty was signed – 0n 93rdmove and 5 hours of play! 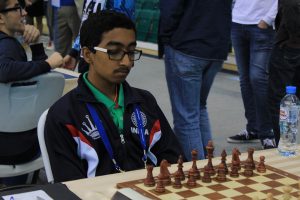 Another interesting game was played by IM KS Raghunandhan, who is spinning back into formgradually.
After yesterday’s lucky and shaky win, Raghu has gained quite a lot of confidence and his today’s win was an example of perfect timing and piece coordination. Playing against Costachi Mihnia rated 2420, he played King’s Indian Defense. This was a big surprise for his opponent as Raghu hasn’t played it before! It was natural that Costachi was unsure of Raghu’s preparation and made a simple tactical oversight on 14th move which gave slightly better position to black. Raghu was in great form today and he en cashed another error by white on 16th move. Here onwards, Raghu took over the reins and directed all his forces for an assault on white’s King. Costachi tried his best to defend the attack but Raghu’s timely exchange sacrifice thwarted white with his last hope. Instead of choosing between 2 options – “checkmate” or “play without queen”, Costachi decided to get over all the troubles by surrendering!
Very well-played game by Raghu and certainly a morale booster for himself as well as entire Indian team.

In the Under 16 G section though Akanksha took to sole lead in the previous round, she was outwitted in round 7 by WFM ShuvalovaPolina. Polina is at least over 200 ELO points more than Akanksha’s rating.

In the Under 14 G section, Vantika Agarwal comfortably and confidently held her highly rated Russian opponent who was rated 300 ELO points more than her.

As the countdown has begun, we are anticipating more winning conversions for the team… Good Luck!
(Games Analyzed by FT Jayant Suresh Gokhale and Mr Hanuantha Rajanna)

Results of Indian Players for the day: Round 7 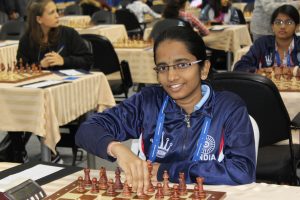 Today we have tried to include story of two of our team members Priyanka Kalidhass and Mahalakshmi Mugunthakumar whoare key players of the team. Both Priyanka and Mahalakshmi hail from Tamil Nadu and are students of GM RB Ramesh at Chess Gurukul, one of Chennai’s premier chess clubs.

‘Maha’ as she is fondly know in the chess circle is a 1st year student of Bachelorate in Commerce with a specialization in Accounting & Finance at MOP Vaishnav College, Chennai.

At the tender age of 5, Maha took the game of Chess from her third sister, M Jagadambal who played chess for many years and is currently a trainer at one of Chennai’s Premier Club, Maha’s initial days of training was with vetran chess coach Ismail for a couple of years from whom she transitioned to popular trainers SC Subramanian and then to MR Sangeetha. As her chess adventure, so did her need for higher focussed training. Maha move into the guidance of senior trainer T J Suresh Kumara for a few years and currently with Chess Gurukul under the expert guidance of GM RB Ramesh.

Maha’s chess journey is interesting. Winning her the 1st state championship she participated in 2004 in the Under 7 category, she started playing her wins strong and steady. She went on to win the 2nd nationals she participated in 2005 in Under 7 category. This key win qualified her for representing Indian in international arena. She placed herself 4th in Asian and Bronze in the World Under 8 Championshipand there was no looking back after that… she progress with accumalating more accolades.
Her success continued. In 2007, earned her FIDE at a Open rating tournament in Bangalore..followed by her key victory at the Asian Under 10 Championship in 2008 that gave her Women FIDE Master title.
In 2015 her championship win at World Youth in the Under 18 category earned her the Women International Master title

She initially received support from Rotary Club of Madras for her chess ventures for a few years and now is being sponsored by ONGC. In her 13 years of seasoned chess experience, Maha has seen many uphills and down falls and has remained stead fast in her goal to reach the next mile

Apart from Chess Maha loves reading biographies and books on self development. 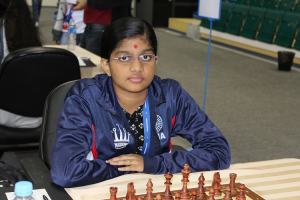 Priyanka is a 10th standard student of Chinmaya Vidyalaya Matriculation Higher Secondary School, R S Puram, Coimbatore.
She was introduced to the game of Chess at the age of 7 by her as a good to learn hobby like other kids. However unlike other kids, Priyanka’s story to grabbing chess is a bit different and interesting..
“I used to win many competitions for co-curricular activites fancy dress, extempore & oratorical competitions, but my prizes used to be very small in size even if I won first…” exclaimed Priyanka…. As I was trying to understand context to her statement and reason for sharing this now..she continued..” there used to be a girl who did bring big cups to our school assembly but that was for Chess” commented Priyanka with a convincing smile and I acknowledge
Priyanka’s initial inclination to chess was due to the physical size of prices that a player could win unlike other co-curricular activities and sports…however, to her surprise, it has hooked on to her for a life time of course for aspirational reasons
Her 1st chess guru, though not a formal trainer was her father’s friend Mr Rajendran who fondly taught her basics of the game and nurtured her love for the Black and White pieces. As her interests grew, she needed formal training. In 2009, Priyanka moved into the guidance of Coimbatore popular coach Dhanasekhar.
Within 1 year of playing she earned her ELO rating of 1496 in Edore in 2010 . She went on to win the Under 9 state championship followed by 4th position (tied for third) at National Under 9. Followed by Silver in Individual and Gold in team at Asian Schools Chess Champions in 2010.
As Paulo Coelho once said, ‘When we least expect it, life sets us a challenge to test our courage and willingness to change’; life threw up a huge personal challenge and Priyanka lost her father at a tender age of 10. The little girl took a while to come to terms with realities of life
But nothing stops a winner. As it is said ‘ Obstracles are put in your way to see if what you want is really worth fighting for’; Priyanka bounced back in a spin. She knew what she wanted and was backed by her father’s aspiration and blessings.Her mother Mrs K Maruthambal and maternal uncle Mr K V Sridhar has been her pillar of strength motivation and fuel since then. Priyanka is the focal point of their life too..
In 2013 her mother and uncle approached GM RB Ramesh for expert guidance which he willingly agreed recollecting her father’s aspiration for her to become a Grand Master and his discussion, during her 1st World Youth Championship at Greece in 2011, 10 days before his sad demise.Since the, she has been under the guidance and care of GM RB Ramesh for all her chess endeavours and is currently in need of sponsorships to continue and expand her chess endeavours.
Priyanka’s key wins include:
2016 Asian Junior Chess Championship 4th
2016 made her maiden WIM norm at World Junior Chess Championship at Bhuvaneshwar
2016 Gold at Under 19 Tamil Nadu State Chess Championship
2015 Bronze at National Under 15Bronze, tied for 1st
2015 Qualified for National Women Premier
2015 Winner at KCM International Chess tournament at Coimbatore
2015 Winner at TK Below 2000 FIDE rated chess championship at Tuticorin

Apart from chess Priyanka loves to play badminton for fitess and watch movies for fun! 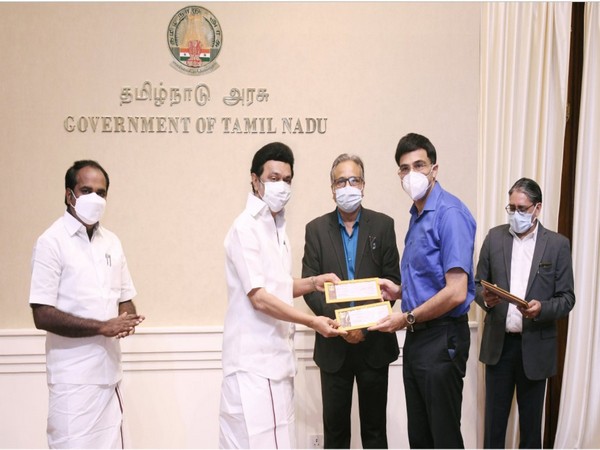