It Will Be A Very Tough Match” – By Arvind Aaron 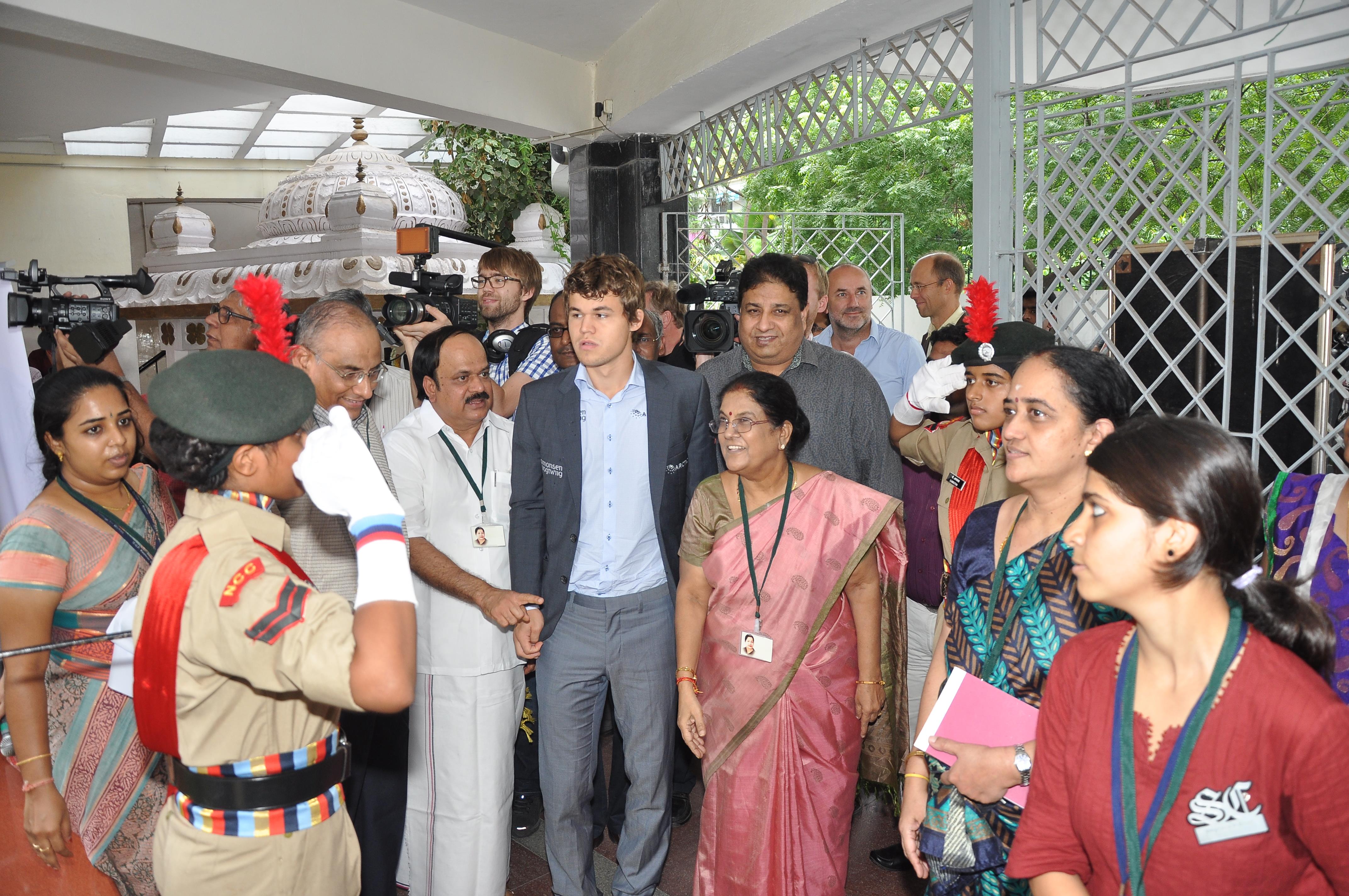 “Very satisfied at the arrangements made for the World Chess Championship match in Chennai so far,” said the World No.1 Magnus Carlsen.

Carlsen defended his decision to come for an inspection of the venue. Carlsen took questions from the press and media while refusing to go into the details of the illness clause in the contract.

Magnus Carlsen was all praise for his opponent Viswanathan Anand in his meet-the-press after the simultaneous display at Chennai on August 19, 2013. Carlsen has worked in the Anand team in 2007 and 2008 prior to the Anand v Kramnik world title match.

Challengers often found the right of world champions tough. Carlsen said the champion has a slightly unfair privilege of not having to qualify for the finals. “But I can do nothing about it,” said Carlsen. In case of a 6-6 tie in November 2013, the match will be decided in rapid playoffs. This is good for the present day challengers. When Anand was a challenger, first time, in 1995, if the match has tied 12-12, Kasparov would have kept the title. Rules were loaded against the challenger those days.

I might have been lucky to qualify from London and get here but I am not scared here, said Carlsen. About Kramnik’s comments on Anand giving Carlsen too much respect, the World No.1 said, “in interviews Kramnik is a loose cannon.”

For the first time since 1921 both participants in the world chess championship do not speak Russian. Carlsen said it showed that the game has spread well to the other nations but disagreed and said the Russians are still a force in chess.

Arriving to a roaring, noisy welcome at the M.O.P. Vaishnav Women’s College, Carlsen and his team were given a grand reception. Magnus means great and many kings from Norway have had this first name, said J.C.D. Prabhakar, President of the All India Chess Federation.

The World No.1 ranked Magnus Carlsen who had accepted to face 20 players, found the going tough and that was visible in his face during his games. Chennai players aged 7-17 were lined up for a 20-board simultaneous display against the visiting World No.1 ranked Magnus Carlsen. It was estimated to last two hours but it went on for two and a half hours.

The Norwegian media might have expected a 20-0 sweep. However, that was not to be. Four players defeated him, six made draws and Carlsen won just ten games.

In the end, Magnus Carlsen, 22, gave an advice for the children. “Please dont be so modest next time!” said Carlsen while commending the playing strength of the future champions.

The first round in Chennai is going to be tough and hot as the weather turned hot today after the pleasant last few days. True to his greatness, the visiting champion varied in his white games and event chose the rare king’s gambit to defeat in form National Sub-Junior champion Monnisha.

However, G Jaswant, Visakh Nr, Ram Aravind and R Vaishali managed to defeat the World No.1 ranked player. Six players also had the moment of their careers when they drew Carlsen.

The players who held him to draws include: Pranav Vijay, Michelle Catherina, Aravindh Chithambaram, M Mahalakshmi, U. Ashwini, Ja Gireman.

Prior to the simultaneous display, Carlsen and his group were entertained with a “welcome to India” song by the students of M.O.P Vaishnav Girls College inside their campus in Nungambakkam in central Chennai.