This is to inform all concerned that FIDE has directed that all FIDE Rated tournaments from 01.01.2013 onwards should have only licensed Arbiters

In view of the above the AICF would like to arm itself with adequate number of Senior Arbiters along with the existing International Arbiters & FIDE Arbiters. AICF has been organizing FIDE Arbiter Seminars regularly for the past four years with view to broad base the number of FIDE Arbiters. Many Grandmaster tournaments are encouraged by AICF not only to help players to get FIDE title Norms but also to help many gain FA & IA Norms. Only the above three categories of Arbiters (IA, FA & Senior Arbiter) will be recognized as technical officials to conduct FIDE rated tournaments by AICF. As per AICF decision all the arbiters have to register with AICF with annual fee of Rs.1000/-. Henceforth, only those arbiters who are registered with AICF and subsequently with FIDE will be allowed to participate in tournaments as technical officials from 01.01.2013 onwards.

AICF had already conducted the Senior Arbiter Examination at three centres namely Chennai, Kolkata and Guwahati on 9th December, 2012. Further to the above the AICF will be conducting one more Senior Arbiter Examination which is organised by Chess Association Kerala at Thrissur, Kerala on 28th July, 2013. Interested persons may kindly send the attached registration form filled along with a fee of Rs.4000/- by Demand Draft favouring All India Chess Federation payable at Chennai. The same may be sent on or before 26th July, 2013. Please be informed that you will attend the examination at your own cost including boarding & lodging. 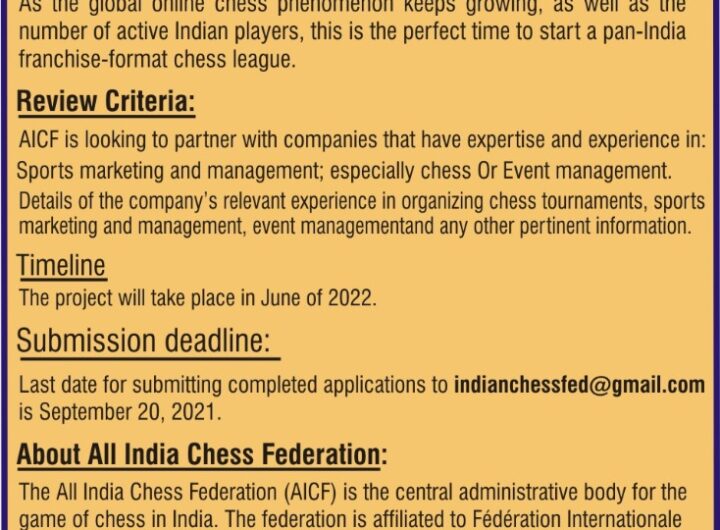