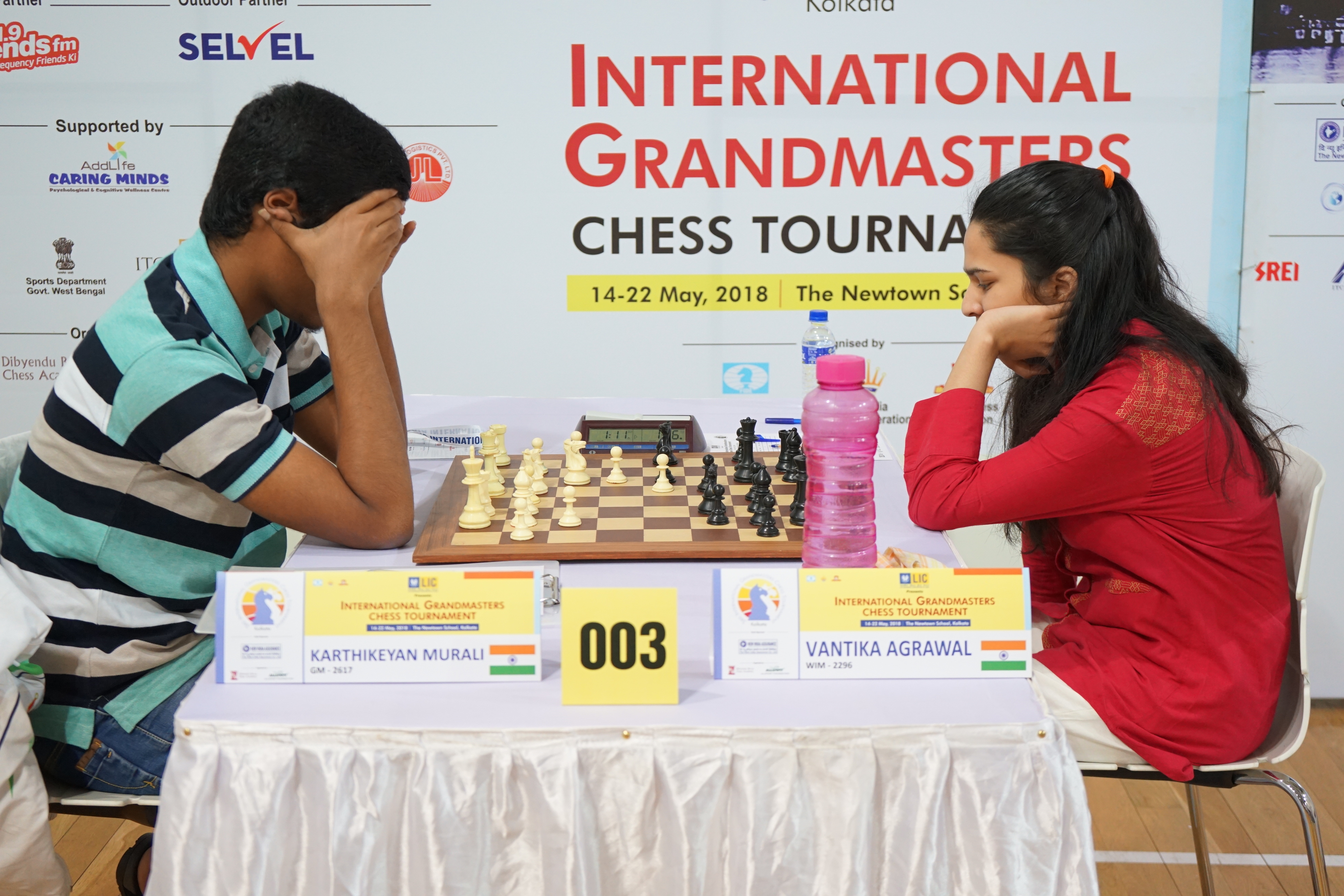 Few of the world’s top Grandmasters are in action at the Kolkata International Open that kicked off on Monday. The nine-round Swiss system tournament organized by  Dibyendu Barua Chess Academy is being held at New Town School in Kolkata, West Bengal. The event has  +200 participants from across the world while GM Nigel Short is the top-seeded player.

Grandmasters Farrukh Amonatov (Tajikistan), Andrei Deviatkin (Russia) and Rajaram Laxman were the other Grandmasters who could not outplay their lesser rated rivals, being held to draws by Kushager Krishnater, Sohel Chowdhury and S.S.Manigandan respectively.

The top seeded Nigel Short and his other Grandmaster colleagues had a comparatively easier outing coasting for easy victories in quick time. At the end of the first round, 84 players had scored a full point to maintain clean slates.

In one of the last games to finish, 13 year old Indian prodigy IM Nihal Sarin was held to a draw by 14 year old Sambit Panda of Orissa, in a game which lasted more than four and a half hours in a long Rook endgame.

In a Sicilian Najdorf game which delighted the spectators, Nigel Short with black pieces executed a copy-book exchange sacrifice against the English attack of Mehdi Hasan Parag of Bangladesh. He chased the white king around in a fierce mating attack and won in just 26 moves. A likewise attacking performance came from local Grandmaster Sandipan Chanda who played creatively with the Dutch defence and won with black pieces chasing out the White King to the b3 square.

Teen aged Women International Master Vantika Agarwal of Delhi provided the biggest sensation when she defeated two time national champion and Grandmaster Murali Karthikeyan of ONGC in the second round. Ironically, the other biggest upset of the round came from a player at the opposite end of the age spectrum, as 55 year old veteran International Master D.V.Prasad of Indian Oil Corporation defeated Grandmaster Deepan Chakkravarthy of Integral Coach Factory.

Former World Junior champion  Abhijeet Gupta was lucky to escape with a draw against teenager Raja Rithvick on the second board, while other creditable results of the day were by achieved by teenagers Sai Viswesh of India and Mohammed Fahad Rahman of Bangladesh who held Grandmasters Adam Tukhaev and Rohit Lalithbabu to draws, respectively.

Playing the black side of a Kings Indian defence, Vantika went in for a pawn sacrifice on the 30th move which did not look sound enough. With both the players down to their last minute on the clock, she was rewarded for her risky play when Murali Karthikeyan blundered on the 36th move. Fingers shaking, Vantika kept her nerves to effect a simple combination involving a Knight fork and won material to force a win in 42 moves.

In a surprisingly one-sided middlegame arising out of a Ruy Lopez Chigorin variation, Prasad showed glimpses of his class as he made inroads into Deepan Chakkravarthy’s kingside and steadily won material to win flawlessly in 49 moves.

Abhijeet Gupta was under pressure from the early middlegame onwards, and was down a piece by the 42nd move. However, young Rahman couldn’t keep his nerves in the final phase of the game and blundered back on the 54th move with a simple oversight to see his advantage evaporate.

The top seeded Nigel Short showed none of the fluctuations in form of Grandmaster colleagues around him, as he made short work of Women International Master Vaishali in just 21 moves to keep a full score. Thus, he kept his evening free enough to attend to his other passion of Cricket by leaving for Kolkata Knight Riders’ clash against Rajasthan Royals late in the evening.