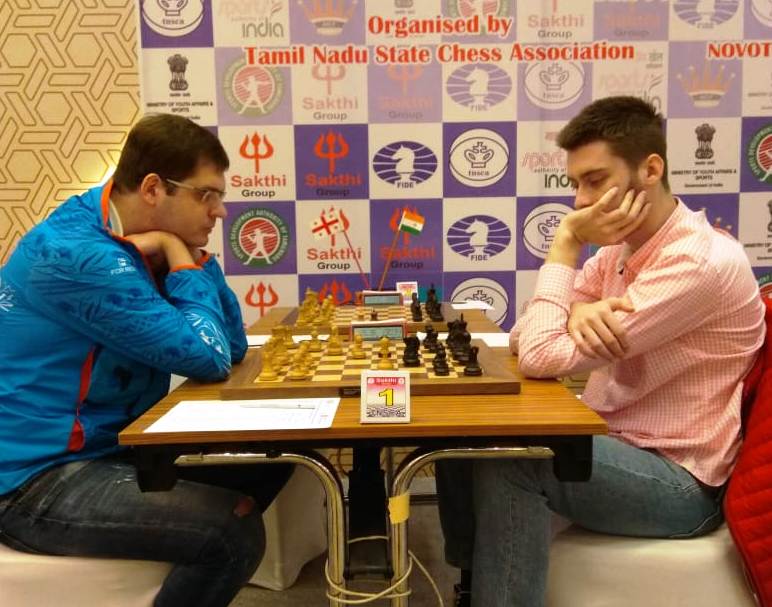 Sharing the second spot with 7.0 points was Pantsulaia Levan of Georgia. Further half a point behind at third place with 6.5 points were top seed Predke Alexandr, Popov Ivan, Deviatkin Andrei (all Russia), Paichadze Luka (Georgia), Girish A Koushik and Vignesh N R (both India).

The top board game turned out to be a Queens Gambit Declined affair, where Kirill Stupak opened up his kingside for initiative. With both players castling long, the middle game piece play led them to a rook and minor piece ending. Overnight leader Lugovskoy played it safe, creating positional weakness into white territory. Kirill gave up when his position appeared falling apart, as he ran into his final seconds of play.

The second board, saw top seed Grandmaster Predke Alexandr (Russia) shedding one more draw, this time against Grandmaster Paichadze Luka of Georgia. The Ruy Lopez exchange variation game saw early aggression from black. But, as soon as the queens were traded off, the players repeated their moves in a rook and knight ending signing peace after 31 moves.

Sivaganga boy M Pranesh scored a fine win over International Master S Nitin of Southern Railways. With six points in his kitty, Pranesh is on the right track to achieve his International Master Norm. This ten round Swiss event carries a prize fund of Rupees 15 lakhs with 55 prizes in the Open & Category sections. The final round is scheduled for Friday, 25th Jan,2019.