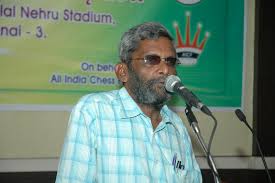 Muralimohan Is No More
By Arvind Aaron

K Muralimohan (1950-2015), International Arbiter passed away at Chennai on April 3, 2015 after a brief illness. He was a chess player, author of several books published by his Capa Chess Books and a chess administrator.

Muralimohan held the longest term as Secretary of the Chennai District Chess Association. He held similar positions at Madurai and Delhi. He had retired from UCO Bank and had worked around India.

In the last decade, he was elevated as General Secretary of the Tamil Nadu State Chess Association and he was also the All India Chess Federation’s Joint Secretary & Rating Officer.

Humour and eye to pick combinations separated him from other authors. He ran chess columns on tactics in magazines as Chess Mate. Of his books, Endless Endings penned by him should be in the houses of more upcoming players today.

Muralimohan is survived by his wife and two daughters.