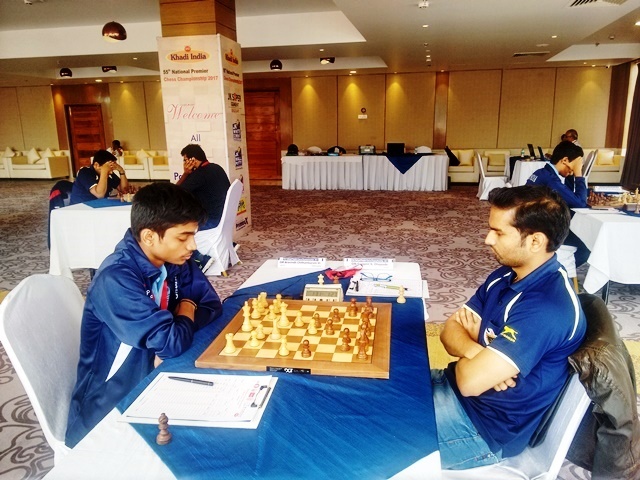 Former runner up in the World Youth Under 16 championship and grandmaster Aravindh Chithambaram of Tamil Nadu defeated GM Swapnil Dhopade of Railways to join two more grandmasters SL Narayanan of Kerala and MR Lalith Babu of PSPB at the top after the fifth round of the Khadi India 55th National Premier Chess Championship, organised by All Bihar Chess Association at LemonTree Hotel, Patna today.

GM RR Laxman of Railways who had a credible win over his ICF teammate Deepan Chakkravarthy and national champion Karthikeyan Murali of Tamil Nadu are half a point behind the leaders with three points each.

When all the pieces were exchanged, except a rook, the Caro Kann defence played by Swapnil Dhopade seemed heading for a draw. The placement of the five pawns was also symmetrical. But the never say die spirit of the young boy from Tamil Nadu had other ideas. Aravind offered a pawn break at a5, but his opponent did not accept it. When Swapnil made a mistake of allowing Aravindh’s rook to the eighth rank, the latter made use of the chances to script a win by a beautiful rook sacrifice. 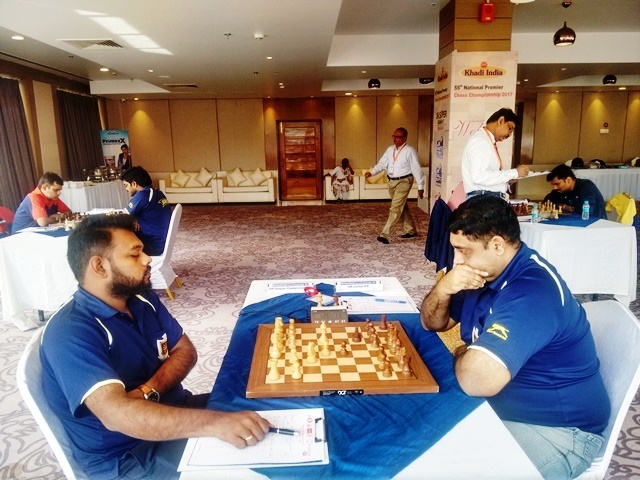 In the Giuco Piano opening, both Laxman and Deepan attacked and counter attacked to produce a complicated position in the middle game. Laxman’s pawn even made inroads into the seventh rank by move 23. When Laxman, with his knight captured Deepan’s rook on d1, the latter’s ploy might have been correct. But, instead of picking up the knight, Deepan made a blunder by sacrificing his queen on 34th move. His calculations for a checkmate did not work out, with only his rook and bishop in active play. Laxman won exactly after 40 moves, his second win on the trot and it was a hat trick of losses to Deepan. 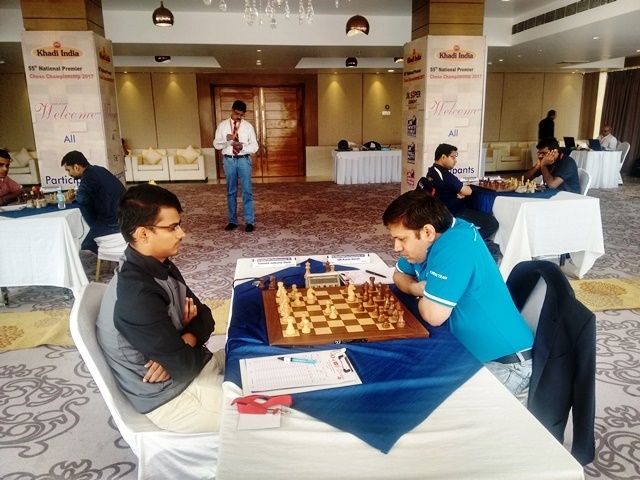 The only untitled player Sammed Jaykumar Shette of Maharashtra scored his first win of the tournament at the expense of former national champion and experienced grandmaster Abhijit Kunte of Petroleum Sports Promotion Board. Though queen side castling is not rare in the Taimanov variation of Sicilian defnce, Sammed’s action at a time when the queen side pawns of Abhijit were moving ahead was a surprise. When Sammed’s two rooks and queen fell in line on the g- file to axe the opponent’s king, Abhijit made a weak move Rff8, overlooking the rook sacrifice by Sammed for a checkmate. Abhijit did not hesitate to resign immediately.

The first ten moves of the encounter between grandmaster MR Lalith Babu of PSPB and international master Arghyadip Das was a repetition of the third round game of the World Cup finals played by Levon Aronian and Ding Liren. The English opening did not provide any thrill and the arbiter had to accept the draw claim by three fold repetition before 25 moves.

In the Scandinavian affair between S Nitin of Railways and Debashis Das of Odisha, the two players signed the peace treaty after 34 moves in a knight and pawns ending.

Former Under 12 & under 16 world champion Karthikeyan could not maintain the tempo to a winning advantage in the Philidor’s defence played by him against SL Narayanan. He had to be content with a draw in 43 moves. The result in the Sicilian defence by grandmaster Himanshu against his teammate P. Shyaamnikhil also ended without any favour to both.