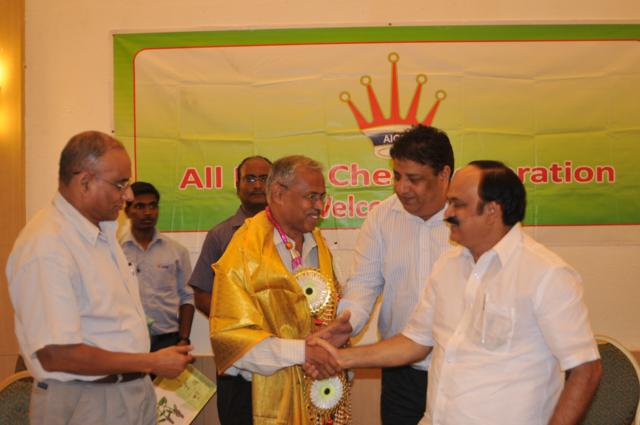 Important decisions taken at the Annual General Body Meeting of the All India Chess Federation held at Hotel Ramada Egmore, Chennai on 23.06.2013

2.     V.Hariharan of Tamilnadu took over as the Hon. Secretary of All India Chess Federation from Bharat Singh of Delhi who had to step down to be in tune with the Government of India guidelines on tenure of office bearers in National Federations issues. V.Hariharan is a former National A player and represented India in the Asian Team Chess Championship held at Singapore in 1987. He is also a qualified FIDE Arbiter and currently the Rating Officer of AICF. He is also the General Secretary of the Tamil Nadu State Chess Association.

3.     In the resultant vacancy caused due to Hariharan’s elevation as Hon. Secretary Mr.Kishor Bandekar of Goa has been nominated as the Joint Secretary.

4.     The AGM approved the appointment of Mr.Bharat Singh as the Chief Executive Officer (CEO) of the All India Chess Federation. While agreeing to serve the AICF as CEO, Mr.Bharat Singh refused to accept any salary for the same.

5.     The AGM also accepted the request of FIDE to have the Presidential Board Meeting of the FIDE at Chennai during the World Chess Championship match.

“Henceforth Grandmasters with 2500 ELO Rating in Open and Woman Grandmasters with 2200 ELO rating in Women category will be considered under Special entries for participation in the Asian Individual Chess Championship, even if they have not participated in the National Premier/ National Challenger in the immediate previous year. However, such ratings should reflect in the FIDE rating published two months before the start of the tournament”.

“The procedure for selecting the Indian Men and Women team for the World Team Championship / Olympiad / Asian Team championship will be as follows. The National Champion plus the top four rated (published rating two months before the event). However, while computing the rating 75 ELO points will be added to all those who participated in the Premier / Challenger National Championships in the immediate previous year”.

7.     Delhi chess player D K Chopra of Delhi was slapped with a life ban by the All India Chess Federation after he was found guilty of his various misdeeds for the past four years. Several complaints were received especially regarding his misbehavior with women and children during tournaments.

8.     The AICF and Tamil Nadu State Chess Association decided to organize many tournaments during the World Championship match between GM Anand vs GM Carlsen. Many tournaments are lined up from 9am to 1pm so that all those coming to Chennai will witness the Anand match. This the AICF members felt that the atmosphere will be “Like a Carnival”.

9.     The meeting was chaired by Mr.J.C.D.Prabhakar, President All India Chess Federation.