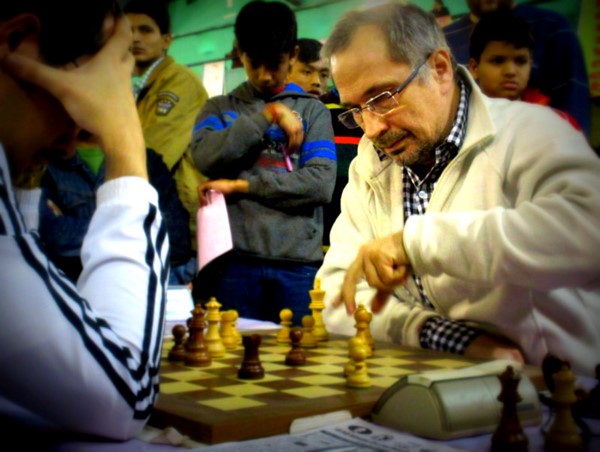 The first table saw Neverov take on Saptarashi Roy with the black pieces. The game was a complicated Sicilian Richter-Rauzer, where Roy went gung ho on the kingside to build a mighty attack. Neverov defended resourcefully, although he later admitted he could have defended better. And then, in a dynamically equal ending, Saptarshi Roy went wrong and lost.

Shyaamnikhil and Sayantan played an interesting game as well with a curious endgame where Shyaamnikhil with white had a king and a rook while Sayantan had a bishop, two pawns, and the king, with black. It ended in a draw.

Tarun V Kanth settled for a draw with Akash Thakur who is rated about 300 points above the former. This means that Valeriy Neverov had a comfortable half-point lead after five rounds of play.

In the Juniors section, Sankarsha Shelke of Ahmednagar continues to dominate the tournament by successfully defeating the top seed Gukesh D. of Andhra Pradesh. Sankarsha, playing with the black pieces, employs a Sicilian where Gukesh chose to avoid the main lines. The position eventually reached a hanging pawn structure where all Gukesh’s pieces turned out to be misplaced. Sankarsha thus won a crucial encounter to solidify his half-point lead as he has put the top seed behind him.