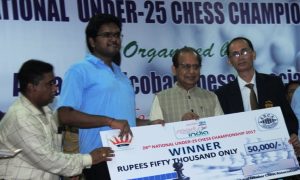 The tournament ran from 13th to 19th July, 2017 in JNRM College, a venue that was facing the sea, a spectacular one by all counts. Fresh air, less cluster of traffic, hills and sea all round, made it a memorable playing experience for those who were fortunate to make it to Andamans.

Shyaamnikhil was steady right through shedding two draws on way to the title. The lone challenger to the title Mitrabha, faced Shyaamnikhil in the fifth round and a defeat in the hands of the top seed, almost put paid an end to his chances. The title should be sweet for the 24-year-old Champion, who made it in his last attempt.

The nine round Swiss tournament attracted 122 entries, the highest in the history of National Youth Championship. An Internatioal Master, two FIDE Masters and two Candidate Masters completed the line-up. The tournament also happens to be first FIDE Rated tournament in Andaman Islands which had the representation from 17 states and 4 four Union Territories.

The organising committee headed by Shri G Bhaskar, President, Andaman Nicobar Chess Association set high organising standards, taking the National Championship to a new level. As soon the rounds were complete, players were shown around the beautiful Islands one landmark after the other. Hospitality was par excellence and the personal touch shown in each and every detail, is likely bring more such events to Andamans in future