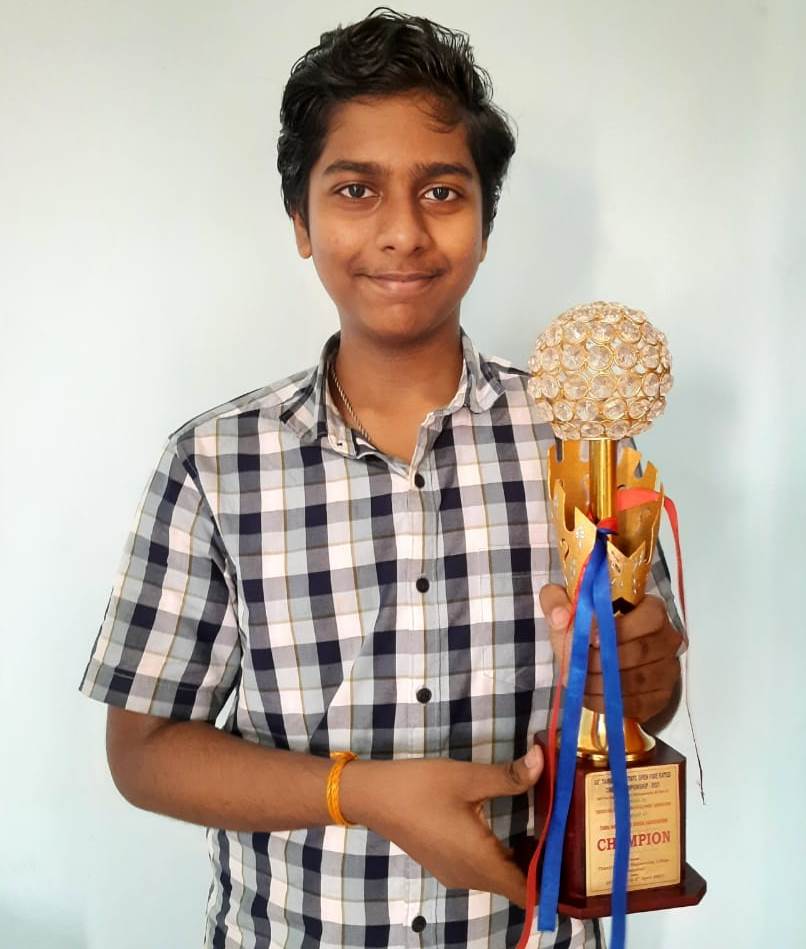 Three hundred and seventy four players from 30 districts participated in this nine round swiss format tournament out of which 207 players were internationally rated. The seeding list was spearheaded by the fifteen year old defending champion V Pranav (2348 rating) of Velammal Vidyalaya, Chennai. N Lokesh of Krishnagiri, K Senthil Maran of Thiruvallur, IM Balasubramaniam R of Chengalpattu and the runner up of the last edition SS Manigandan of Madurai were seeded from 2nd to 5th respectively.

The first round witnessed a mild upset when S Jai Karthik of Trichy held sixth seeded FM T Purushothaman of Thanjavur who recently migrated from Andhra Pradesh. In the third round, second seeded N Lokesh had to share the point with Sudharsun Gurukrishnan of Salem in a same colour bishop ending. There were two more drawn encounters among the top seven boards, wherein former national blitz champion Ram S Krishnan of BSNL had to give up half a point to V Mithun Anand of Thoothukudi and higher rated G Gugan of Salem had to concede a draw to S Sathyanarayanan of Chennai.

Of the top five games of the fourth round, FM Senthil Maran and M Barath Kalyan of Tiruvarur were forced to split the point with Aadith R of Chengalpattu and Sree Veeramani P of Kanchi respectively. Twelve players shared the lead with four points each at the end of the fourth round. Three players Pranav, IM Balasubramaniam and fourteen year old R. Shadhursshaan of Aruppukottai, Virudhunagar district emerged leaders with a full score of five points from five rounds. The friends and foes SS Manigandan and RM Subramanian both from Golden Knights Chess Academy Madurai drew their games, as did Arnav Maheshwari and Nikhil Magizhan of Tiruvallur district. In this round, Shadhursshaan played a beautiful game to subdue FM VInoth Kumar M of Chennai, rated 500 points above him.

Pranav continued his winning spree recording his sixth continuous victory in six games, this time over the experienced international master Balasubramaniam. On the second board, the in-form Shadhursshaan played on par with the 2019 edition runner up SS Manigandan to extract half a point. Former under 9 national champion and runner up in the under 11 nationals, AR Ilamparithi also drew with Arnav. B Vignesh of Chengalpattu and Barath Kalyan defeated G Gugan and Arunachalam Shivaa of Coimbatore respectively to join Shadhursshaan, K  Nandha Kumar of Coimbatore and RM Subramanian on the second spot, half a point behind Pranav.

Pranav maintained his spectacular form to outwit B Vignesh to register his seventh win of the tournament and another decisive result on the third board enabled Nandhakumar over RM Subramanian to be the only player on the second position with 6.5 points. Again, the tiny Shadhursshaan held Barath rated 600 points above him, to a draw on the second board. Ten players were on the third place with six points each. Pranav did not relax and raced to his eighth win beating Nandhakumar in the eighth round. IM Balasubramaniam, AR Ilamparithi and S Suganthan of Tirunelveli to move to second place, one point behind Pranav.

In the final round, Pranav went on to beat Suganthan to retain his title with a record score of 9.0/9. IM Balasubramanian and Ilamparithi drew their game to finish second and third respectively with 7.5 points each. SS Manigandan and Dinesh Kumar Jaganathan also scored 7.5 points and were placed fourth and fifth. Pranav studying 10th standard in Velammal Vidyalaya, Chennai is coached by FT K Visweswaran.