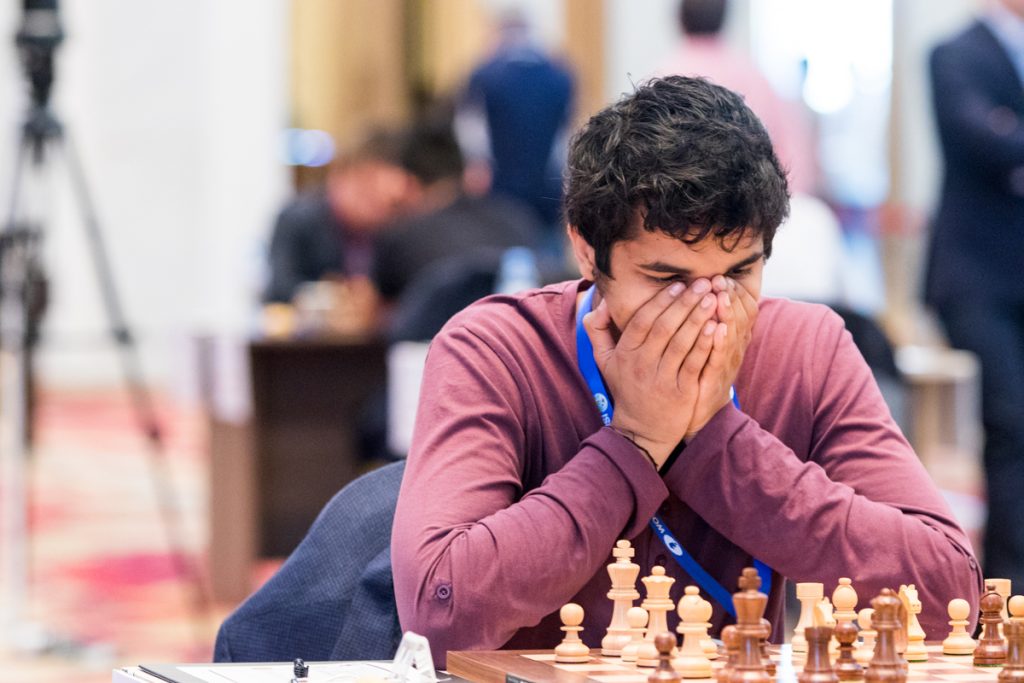 The Indian sojourn at the 2017 World Cup came to a painful end on Monday as the duo of Vidit Gujrathi and S.P. Sethuraman crashed out of the mega-event that is a part of the World Championship cycle.

The highest common factor in the story is how close both Indians were to winning and qualifying for the fourth round.

Vidit Gujrathi was having a smooth tournament, where he was simply outplaying all his opponents. In the third round, he was up against Chinese No. 1 Ding Liren, rated 2776. In the first game with the black pieces, Vidit continued his brilliant form and had a winning position, if not a clearly advantageous one.

But at this crucial juncture, Vidit went wrong with 27…Rdb8?? which leads to a beautiful refutation after 28.Rxb8 Rxb8 29.Bh3! solving all problems for white. This left Vidit with an option of taking a perpetual, which he did. The game ended in a draw.

Sethu was up against Dutch No. 1 Anish Giri, rated 2784. In the first game, Sethu had the black pieces and he eased in with a draw effortlessly. The second game where Sethu had white was a true slugfest, in a Sicilian Najdorf.

Along with the Indians, a long list of world’s top players was eliminated. Magnus Carlsen went down in flames in sensational fashion against China’s Bu Xiangzhi, while Vladimir Kramnik was ousted by Vassily Ivanchuk in a gem of a game. Hikaru Nakamura had to leave the World Cup after losing to Vladimir Fedoseev, while Fabiano Caruana bowed out after losing to Evgeny Najer in the tiebreaker.

Notably, the Canadian GM Anton Kovalyov, who had defeated Viswanathan Anand in the second round, left the World Cup 2017 without making a single move because the organizers and officials rebuked him for not dressing appropriately (Kovalyov was wearing Bermuda pants).

Kovalyov had been wearing the same attire in the first and second round as well and was visibly upset to have been disturbed minutes before his third round game was scheduled to begin. Meanwhile, the officials alleged that Kovalyov was not being respectful towards the prestige of the tournament.

The royal rumble continues in Tbilisi. With both Magnus and Karjakin out, we will have a World Cup not complicated by permutations and combinations of the qualification to the Candidates that is going to take place in Berlin in March 2018.