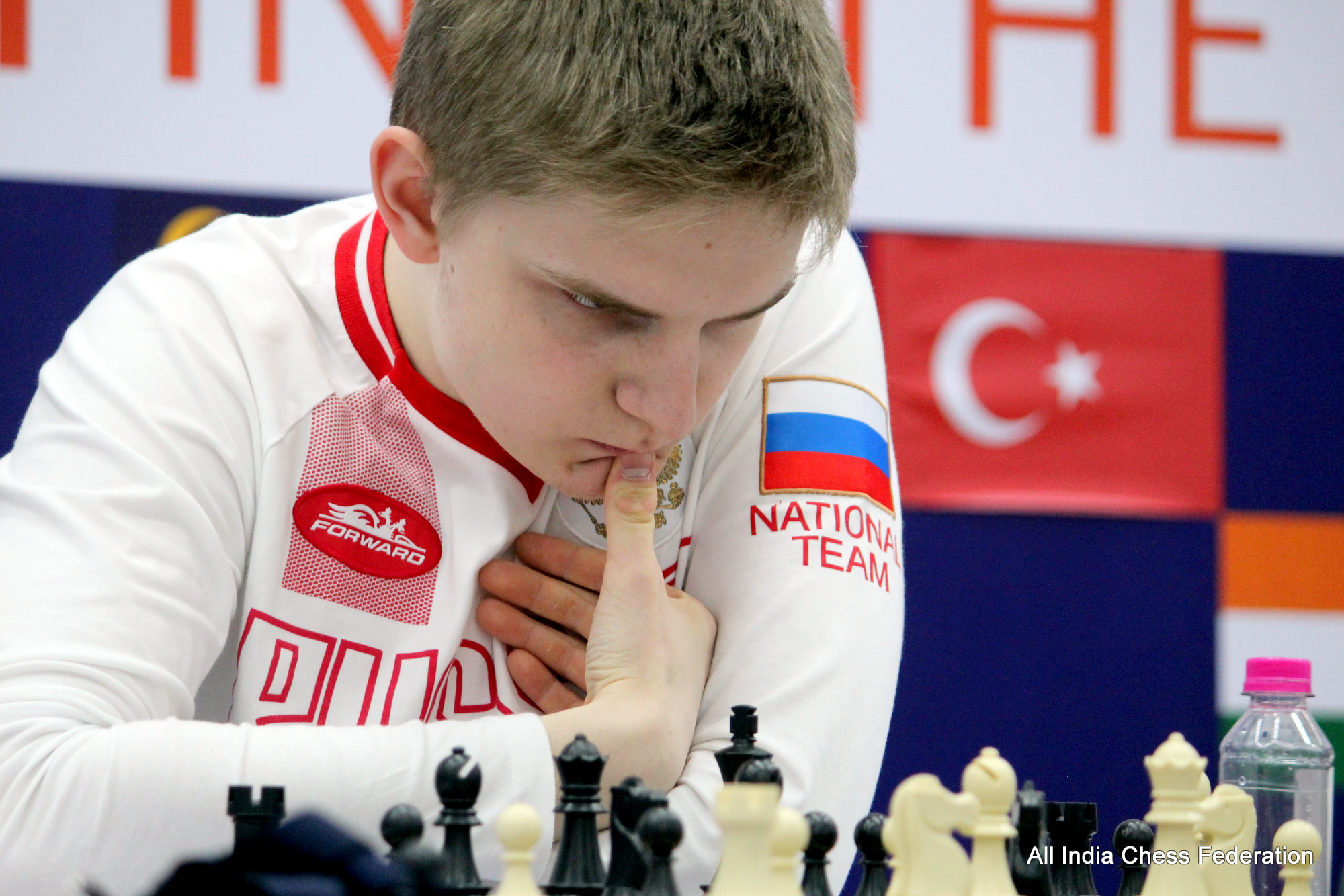 Round 06: Russia breaks through the final frontier

For Team Russia, after bulldozing through the previous five rounds, the defending champion Iran was the final serious challenge. Except for the fourth board, second seed Iran was clearly higher rated than third seed Russia.
The sixth round was to decide if Russia coasts to the Gold medal, or would Iran blow the competition open.

On the first board, IM Semen Lomasov settled for a very quick draw with IM M. Amin Tabatabaei, while on the third board, FM Artur Gaifullin drew with IM Aryan Gholami. On the fourth board, Orimi Golami, rated 2298 was no match for FM Timur Fakhritdinov, rated 2408.

On the second board, the super-talent of Iran, IM Alireza Firouzja was playing with the white pieces against IM Sergei Lobanov. Lobanov played the Caro-Kann Defence and for a very long time, the position looked equal.

On the 32nd move, Lobanov sacrificed a pawn on the queenside, asking Firouzja if he wanted to take it and weaken the dark squares around the White King. The queen could kill the pawn but it would stop defending the dark squares on the kingside. Firouzja took the bait and Lobanov murdered the Iranian in cold blood in a space of seven moves. (P.S.: With a Bishop and Rook Sacrifice for the record).

On the second table, India Green took on the India Red team. It could have been a closer match than it was but as it happened, India Green defeated the Reds 3.5-0.5. The tournament marked the return of form for GM Aryan Chopra who managed to beat FM Rajdeep Sarkar, rated 2408, ending a run of three losses.

The third table saw the fifth seeded Uzbekistan take on the eighth seed Turkey. The Uzbeks had put up a remarkable performance until the fifth round, barring a loss to the Russians. They were expected to roll through the Turkish, especially on the top two boards.

FM Ozenir, 2377, was the star for Turkey as he defeated IM Shamsuddin Vokhidov, rated 2412. On the third board, Daler Vakhidov, rated 2250, could not handle FM Dedebas Emre Emin, rated 2258. This meant that the Uzbeks were out of contention because the first board and the fourth board were draws.

Round 7: It was another match of demolition for Russia.

This time the victim was Team Turkey.

While the first board saw a quick draw between IM Sergei Lobanov and FM Deniz Ozen. On the fourth board, too, there was a not so special draw. On the second and the third board, FM Artur Gaifullin and FM Timur Fukhritdinov came out victorious.

The second table saw India Green beat Belarus 3-1. While GM Aryan Chopra slumped to another loss, this time to FM Viachaslau Zarubitski, rated 2330. IM Praggnanandhaa R. had no difficulty in beating WIM Olga Badelka, rated 2388 after she blundered a pawn in the middlegame. IM P. Iniyan beat Maksim Ivannikau, rated 2221, after Iniyan (too) won a pawn in the middlgame. WIM Vaishali R. played on the fourth board and had an equal position but late in the middlegame, her opponent Arseni Kotau, rated 2145, gave away a piece, enabling Vaishali to win.