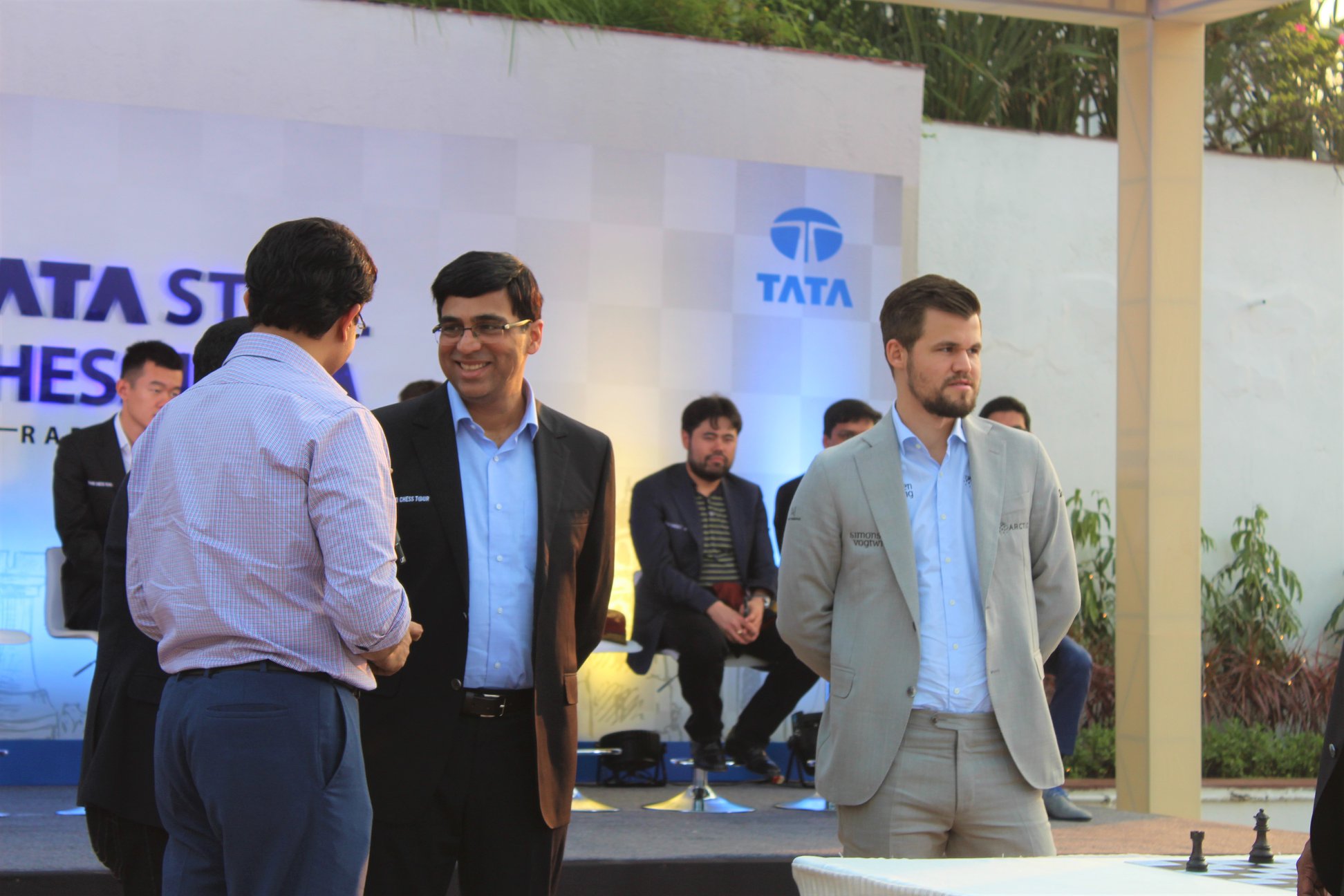 The final leg of the 2019 Grand Chess Tour regular season kicked off today at the National Library in Kolkata, India. Over five days (November 22-26), ten of the world’s top chess players, including the reigning world champion Magnus Carlsen, will compete in rapid and blitz chess for a prize fund of $150,000.

The opening ceremony was attended by Cricket legend and current BCCI President Sourav Ganguly and the group director of Tata Steel, Chanakya Chaudhary. 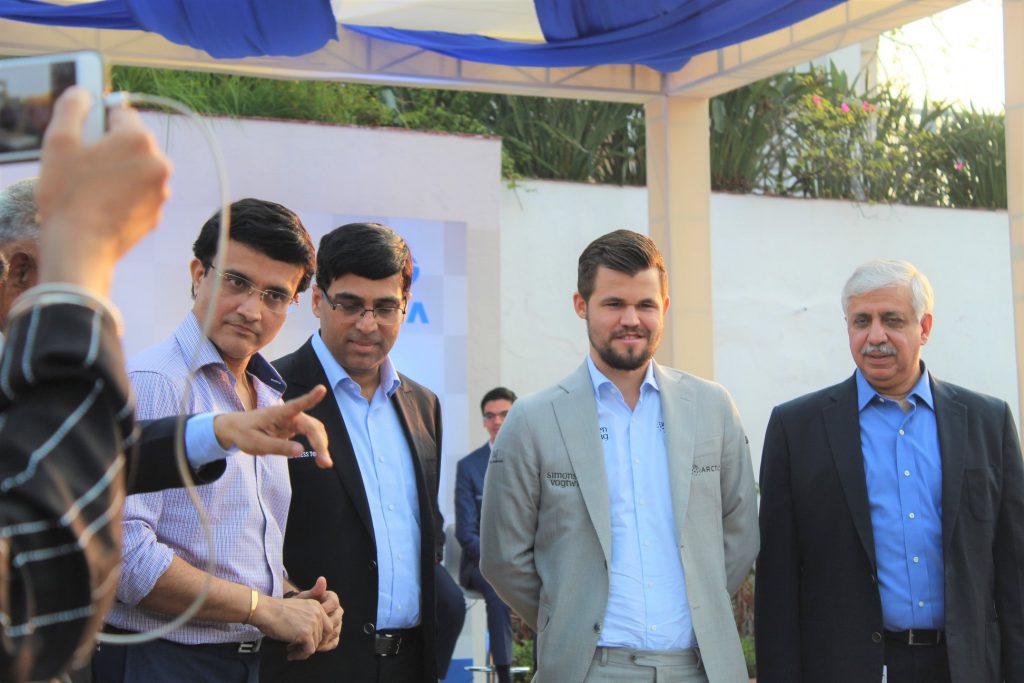 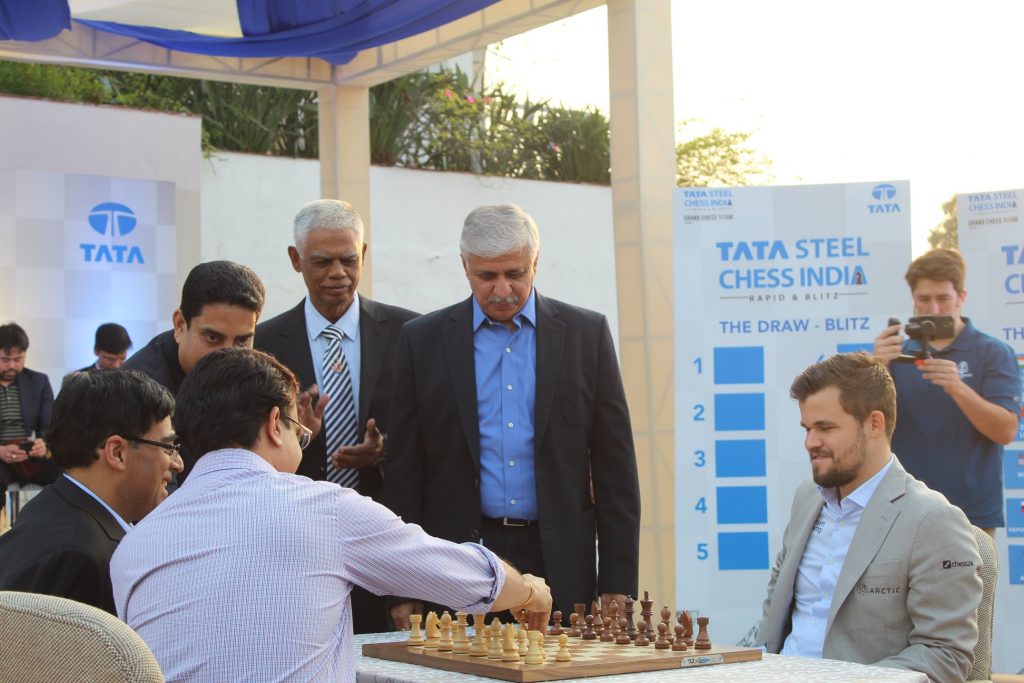 The first day featured three rounds of rapid chess in which players each receive 25 minutes plus a 10-second delay. After an eventful first day, Magnus Carlsen emerged as the sole leader by scoring two impressive victories.

The first round of play began somewhat peacefully as four out of five games ended in draws. However, one game did produce bloodshed as Anish Giri took Ian Nepomniachti. Giri was the first competitor to taste victory after he capitalized on a careless blunder by his Russian opponent. Despite having less than 1 minute towards the end of the game, Giri converted his advantage with a precise mating attack. During the live broadcast, GM Peter Svidler criticized Nepomniachtchi’s tendency of moving too quickly as the culprit behind the blunder. Svidler said, “This is just not great time management” and suggested that Nepomniachti’s playing style makes him more susceptible to one-move blunders.

The second round delivered two decisive games. Nepomniachtchi continued his woes after getting completely outplayed by Magnus Carlsen. The reigning world champion played an off-beat opening variation resulting from a Bb5+ sicilian. His counterintuitive knight retreat on move 9 would look strange to casual onlookers, but it showed his deep strategic understanding of the position. Carlsen went on to dominate play in the early middlegame and took down Nepomniachtchi with seemingly very little fight. It should be noted that Carlsen has already guaranteed himself a spot in the London GCT Finals, but there is still money, rating points, and pride to play for in this event. Indian superstar, Vishy Anand defeated Wesley So to join Carlsen and Giri for the lead. Anand managed to grind down his American opponent in a long and technical endgame.

The third and final round of the day produced the most decisive games, as two of the leaders stumbled. Anand lost to Nepomniachti in a disastrous 22 moves. Giri fell to Hikaru Nakamura (USA) after being unable to hold a difficult endgame. Meanwhile, Carlsen continue his winning momentum as he defeated Levon Aronian in a fascinating game. After getting a risky position with the black pieces in a Najdorf Sicilian, Carlsen managed neutralize play in the middlegame. Once given the opportunity to attack, Carlsen did not hold back and sacrificed his bishop on move 34 for monster initiative. He then proceeded to convert an endgame where his three pawns overpowered Aronian’s bishop. This victory for Carlsen catapulted him to clear first on the leaderboard with 5 total points after the first day. Nakamura trails in clear second place with 4 points.

Games will resume tomorrow at 3pm with 4 rounds of Rapid Chess.