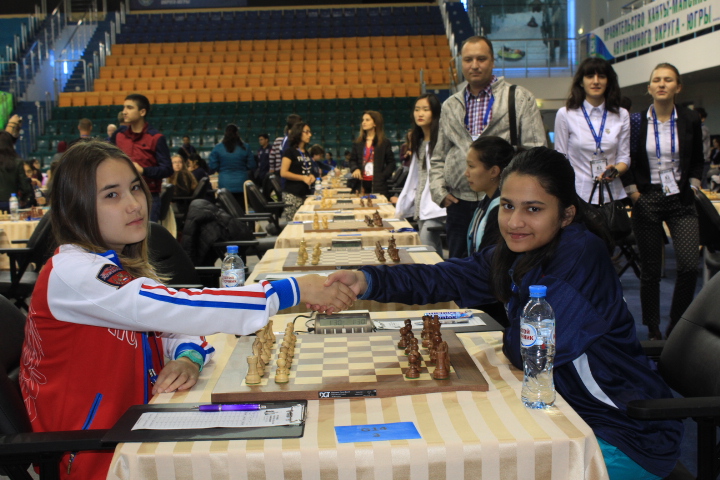 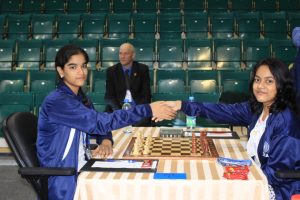 Aakanksha and Vantika continue to lead the battalion!
By T.T.Lakshmipriyaa, Fide Instructor

Unclear position for India at the end of round 9. Indians recorded 7 wins, drew 6 games and suffered 5 losses.

Following her stunning victory yesterday, Vantika delivered yet another blow today and increased her chances for the Medal considerably. Vantika is indeed in her elements and is displaying great strength – today’s was a Pelican Defense as adopted by Vantika. Her opponent, Zotova Anastasia from Russia chose the main line. It was all theory till move 17 and here white got confused and wasted 3 moves, out of which 2 moves were those of King. Vantika is quite an experienced player at the International level and she must have sensed the indecisiveness in her opponent’s strategy.
Like the acts of a well delivered Magic trick – ‘Pledge’ (1stact when something normal is shown, ‘Turn’ (2nd act when the magician takes on the ordinary to make it into something) and ‘Prestige’ (3rd and final act when the actual Magic is delivered); Vantika, understanding her opponent’s indecisiveness, immediately strategized, played all offensive, backed up her attack with cleaver tactics and delivered an impressive win.
Vantka’s timely decision to change the mood of the game proved to be the turning point. The combination, which was revealed on move 24 was quite deep& thoughtful and, Zotova missed it. Vantika grabbed her opponent’s exchange but still didn’t give slightest respite to her opponent and further sacrificed 2 pawns to launch a crushing attack on the White’s King. All that Zotova could do was just ‘follow’ Vantika’s instructions in the form of threats and had to surrender on 44th move when mate was unavoidable.Truly, another masterpiece by Vantika, in consecutive 2 rounds.

As in all tournaments, we do have to play our own team mates as opponents! So was the case for Priyanka N & Saina when they were paired against each other. 1st same country paring for India, but alas at the most crucial round…. Both players fought like brave warriors on the board to split the point after a few hours of battle.
Aakanksha and Priyanka K recorded comfortable wins in the Under 16 G section. Now we have WCM Aakanksha Hagwane, Vantika Agarwal in the forefront; WFM Saina Salonika, Priyanka N, WIM Mahalakshmi are showing some promise. Their wins in the 10th round will be decisive.
In the open category, IM Raghunandhan KS lost a crucial point to a USA FM Hilby Craig in Under 16 and WIM Vaishali R lost to Polish IM Jarmula Lukasz, However Iniyan and others recorded a couple of wins and draws. As of now Iniyan in trailing near the top 10 at the end of Round 9.

As we head towards the end of the championship, we are yet to get our hands on concrete medal opportunities. It is the 1st time in World Youth that the categories have been split and the higher categories Under 14, 16 & 18 are being held separately. Competition is very strong and our players are meeting opponents who are easily 100 – 200 ELO points more than them in rating. Players are playing their best, with of-course some games where they could have played better..
Let’s wait to see Round 10 results before we make conclusions….. game is still on and we still have ammunition to fire!
(Games Analyzed by FT Jayant Suresh Gokhale and Mr Hanuantha Rajanna)
Results of Indian Players for the day: Round 9
Under 18 Open:
11. IM Jarmula Lukasz (2466) POL 4½ Beat 4½ WIMVaishali R (2295) IND; 17. FM Rajdeep Sarkar(2347) TPE 4 Drew with 4 FM Yang Ching Wei Austin (1997) IND; 25. IM Krishna Teja N (2268) 3 Beat 3Khusenkhojaev Mustafokhuja (2212) TJK 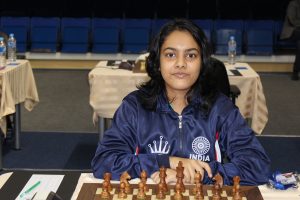 Know your team member:
Today we have tried to include stories of two of our team members from the Indian state Odisha (Orissa), situated on the east coast of India, by the Bay of Bengal: WFM Saina SaloniKa and WFM Anwesha Mishra are currently playing in the Under 14 Girls section in this championship

‘She used to model for a popular product in Bhubaneshwar that was telecasted for a long time on television… she was also anchoring a program on a kids TVchannel at the age of we never thought she would pick chess…we always found her very keen in dancing & modeling unlike her sister who actually liked the chess game and was taking lessions for it’… recollects Saina’s father Mr Ganeswar Jena..
‘Chess for Saina just happened between the age of 5 & 6. She started accompanying her sister to SR Chess Center for some diversion and suddenly one fine day found herself engrossed with the black and white pieces.. Late Shri PL Ray used to say ‘Saina is born to be a World Champion…and she wil bcome one very soon’.. recalls Mr Jena ‘his words did come true in 2013, though Shri Ray was no more to share the happiness of his prediction….we dedicated the victory to him’Mr Jena continued ‘ his words still ring in my ears…that’s one of the key reasons we as parents chose Chess as a serious career for Saina’…
Saina SaloniKa is a 8th grade student of KIIT International School, Patia, Bhuvaneshwar. Started playing chess at an early age of 5, Saina’s first exposure to the black and white board was at SR Chess Center where her siser used to learn chess..
Her formal initiation into the game happened in 2009 by late Shri Padma Lochan Ray, a vetran in chess and a keen motivator. Saina was under Late Shri PL Ray’s care for about a year post which she moved into the guidance of Shri Satyaranjan Patnayak.
Saina’s victory pursuits began…2010 she won National Under 7 Championship in Girls, eared her FIDE rating of 1342 in 2010, followed by another victory at the Asian School Championship2010 in Under 7 Category at Sri Lanka and won Bronze in Under 8, World Youth Championship at Brazil in 2011.
By now her hunger for the game had grown and she needed focussed lessons and she moved under the guidance of Shri Manoj Panigrahi in the same chess training center. Their lessons continued for another 3 years…
‘Ray sir was very good.. very motivating’ shared Saina ‘ his words about me being a good bid for World Championship still rings in my ears but alas, we lost him even before I could prove him right!’ exclaimed Saina in a low voice…’ I won the 2013 World Youth championship in Under 10 Girls category at Al AIn, UAE’.
Saina’s recent key wins include
2016 Silver National Under13
2015 Bronze World Youth Under 12, Greece
2015 Silver Common Wealth Championship, Delhi
2015 Gold Asean Regional Championship, Singapore Individual for Blitz & Team for Standard & Rapid
2014 Bronze National Under 11
2013 Gold World Youth Championship Under 10, AL AIn
2012 Gold Common Wealth Championship Chennai
2012 Gold National School Championship Under 9
2012 Gold Asian School Chess Champion Under 9
2014 Nanhi Pari Little Miss India runner up

Apart from Chess Saina loves dance for to dance for beats and enjoys singing too! It is to be noted that Saine still continues her chilhood hobby for modeling and was awarded Silver at ‘Nanhi Pari Miss India’ contest in 2014. Saina has also received honours from Shri Pranab Mukherjee at the Rashtrapathi Bhavan for exceptional achievement in childhood on Children’s day; November 14 2014. 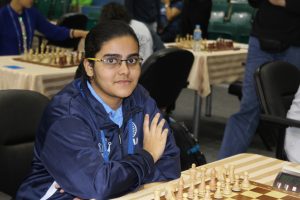 Anwesha Mishra is a 9th grade student of St Joseph’s girls school, Cantonment, Cuttack.
‘She is not an out door kid…’ commented Mr Prakash Kumar Mishra smiling at Anwesha ‘ my wife Reena and I felt chess would be best suited for her’. Though Anwesha’s basic touch and feel of the black and white pieces happened at home, her formal initiation was at a hobby camp which her parents enrolled her in during her summer vacation in 2008 at the age of 7.

Seeing her do exceptionally well, Anwesh’s father, Mr PK Mishra enrolled her with Shri Satyaranjan Patnayak at SR Chess Center where she trained for a year.
However, the coaching classes were not conducive for them to continue, which led Anwesha to take up the self study mode.The, then Under 15 state champion Mohammad Ashraf extended his guidance to the little girl for self preparation. Until 2012 Mohammed Ashraf continued his guidance post which Anwesha transitioned to Rajesh Naik who is a native trainer of the same city and continues to work with her till date. Occationally Anwesha also trains with IM Suvrajit Saha for expert guidance.
Anwesha key recent wins include
2016 Gold at Asian Youth Chess Championship, Under 14 Girls Mongolia
2015 Silver at National Under 13 Girls Championship, Pondicherry
2013 Bronze National Under 11 Girls Championship, New Delhi
2012 Gold at Asian Youth Under 10 Chess Championship, Sri Lanka
2011 Silver National Under 9 Girls Championship, Bhubaneswar

Apart from Chess, Anwesha loves dancing and Mathematics. She is a is a certified Odissy dancer and an IIT aspirant. She has received the Fiitzee special scholarship during their All India Talent Search Examination conducted earlier this year. She was the topper amongst girls in Odisha.