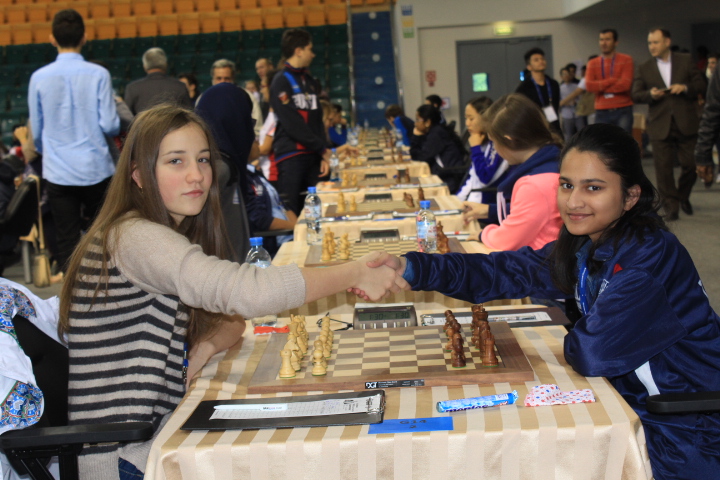 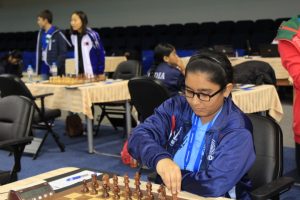 Aakanksha and Vantika on closer at the brim!
By TT.Lakshmi Priyaa, FIDE Instructor

At the end of the penultimate round, after 10 rounds of long play our key players WFM Aakanksha Hagwane and Vantika Agarwal have ensured a closer clinch to medals in their respective categories. Their final round result will decide the color of the medal they would take home….!

Vantika made a hat trick today by recording her 3 rd win over an highly rated opponent. Today her pray was Olga Badelka of Bulgaria having a rating 2222, 200 points more than Vantika! It’s not a wonder that Vantika has scored a ‘century’ (122!) in adding rating points to her existing rating. Playing with an average rating of 2254, her performance is quite identical to that of a Woman Grandmaster.

It was a King’s Indian Defense – Samisch variation game and Vantika didn’t hide her intentions at all and started intimidating her opponent from as early as move 8. It was an adventurous pawn thrust on King’s rook file which pushed back White’s Knight. Vantika also opened another front on the Queen side by sacrificing a pawn. Vantika has a very good flair for tactics and it’s rare to see her missing any types of tactics. Vantika’s active Queen and two Rooks had tied down Olga’s entire army and Olga had to enter an inferior endgame to release some of the pressure on her position. However, in endgame also, Vantika simply kept on creating strong threats with the help of her passed pawn. Soon, the advantage was increased from one passed pawn to two connected pawns! It was really difficult to pin point where Olga had committed a serious mistake and how she could have averted her defeat!

Olga resigned when it was impossible for her Rook and Knight to stop Vantika’s pawn getting promoted to a Queen.

Seeded 12th and being an underdog of the tournament, Aakanksha is playing freely and without any expectations. She had a wonderful start and was the sole leader after 5 rounds. A loss to top seeded Polina and there after a draw had pushed her back a little, but 2 consecutive wins has once again put her in the joint leader status. The National Under 17 Champion, today inflicted an upset win over Vazquez Maccarini from black side. Aakanksha was expecting a Ruy Lopez game but Vazquez surprised her by adopting to Guico Piano set up and it was a pleasant surprise as Aakanksha is very well prepared in this variation. Vazquez’s decision of complicating the game by sacrificing her two pieces for Aakansha’s Rook and 3 pawns was extremely risky. Though, it appeared quite a playable position for White, soon the minor pieces started showing their power. Had the game drifted to an endgame, certainly White’s chances could have been slightly better but with Queens on the board, Aakanksha cleverly avoided trading of Queens! It was actually a matter of few moves and it was evident that white’s position is tearing apart. Vazquez tried one last ‘kamikaze’ attack but alert Aakanksha thwarted it easily and check mated white’s monarch on the 47th move – a rare picture in an International tournament of this caliber!

With two medal promises one each in Under 16 G and Under 14 G, chances for others are very bleak. Lets await results of the final round to know our medal wins!
(Games Analyzed by FT Jayant Suresh Gokhale and Mr Hanuantha Rajanna) 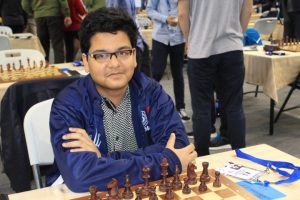 Know your team member:
Today we have stories of two of our team members from the City of Joy – Kolkata : FM Rajdeep Sarkar and FM Mitrabha Guhawho are currently playing in Under 18 & Under 16 Open categories respectively.

Birthday boy, Rajdeep Sarkar is 10th grade student of Bharatiya Vidya Bhavan, Salt Lake, Kolkata.
‘I started playing when I was around 7…my mother wanted to engage me in some indoor sport as outdoor was not of interest to me and ..she got me a chess set..’ smiled Rajdeep
He started his initial lessons at Lake Town chess club in 2008 which continued for around 2 years. As his interest in the game grew, he gradually enrolled into Calcutta chess Academy in 2010. He strengthened his foundation here for around 3 years…
In 2013 when his training needs increased he started taking personalised lessons from IM Saptarishi Roy Choudhury. Rajdeep is under his expert guidance till date.
Rajdeep’s recent key wins include
2016 Silver West Bengal State Under 15, Kolkata
2016 4th in Asian Youth Chess Championship, Mongolia
2016 Gold in Common Wealth Chess Championship Under 18
2015 Gold national Under 17 Championship
2015 Gold National School Under 15 Championship
2015 Gold Asian School Under 15 Championship
2014 Bronze National Under 13 Championship
2014 Gold National School Under 13 Championship

Apart from Chess Rajdeep enjoys reading fiction, murder mystries loves watching Bengali TV serials. He aspires to be a Cardio Vascular Surgeon, a dream his father dreamt which he wants to fulfill 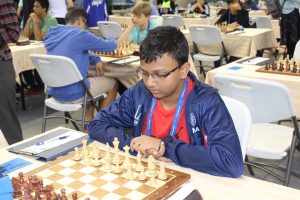 Mitrabha is a 10th grade South Point High School, Ballygunge, Kolkata.
Initiated to chess in a very tender age of 4 by his father Raj Guha, Mitrabha has held chess close to his heart since then

His initial lessons with Mr Manik Bal in 2005 and in about a year he gradually transitionded to Dibyendhu Barua Chess Academy. His initial lessons at the academy was with WIM Saheli Dhar who continued to train him. Mitrabha earned his 1st FIDE rating of 1648 in 2007.

After 6 years of training with WIM Saheli Dhar, Mitrabha moved on to GM Dibyendhu Barua for expert Guidance for 3 years..
Since 2014, Mirtabha has taken to self preparation and has been working on his own for tournaments.
2016 Gold at Olympiad Championship Under 16 category Board price
2016 Gold All India Heritage Schools Open, Kolkata
2016 Silver in Asian Youth Chess Championship for Rapid Under 16
2015 Silver National Under 15 Championship
2015 Gold Common Wealth Chapionship Under 14
2015 Gold West Bengal State Under 17 & Under 19 Championship
2013 Bronze in National Under 13 Championship

Apart from chess Mitrabha loves to play keyboard and is always found busy with his synthesizer.
……….