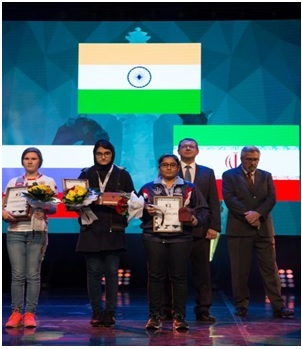 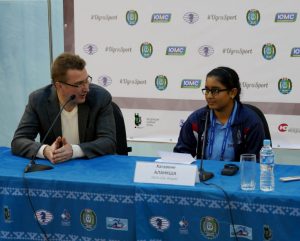 The final round of the World Youth Chess Championship 2016 at Khanty Mansiysk concluded with Pune girl Aakanksha grabbing gold in the Under 16 Girls category. Round 11 started with two of our team members Aakanksha Hagwane and Vantika Agarwal requiring a win in the last round to grab their medals. Though the colour of the medal was dependent on a few other results for Vantika due to Tie break norms, a medal was rest assured with a win for both players.

As the games progressed Aakanksha played strong and outwitted her Polish opponent Sliwicka Alicja.with white pieces. She gained advantage very much within the first time control and subsequently converted the advantage to a win a long played endgame. Aakanksha confirmed and sealed her championship victory with this win. 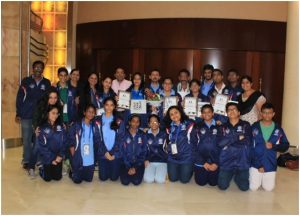 Things were different for Vantika. One, it was a ‘must win’ situation for her to look at medal options; two, it was dependent on a few other results as well. The Delhi girl, confronted Chinese star Zu Jiner on the top board. Both Vantika and Zhu Jiner do not have major difference in rating, but alas, it was not Vantika’s day. Opening progressed smoothly, however in the middle game following some passive move choices from Vantika with white pieces, black gradually started gaining advantage. After the first time control, Black’s play strengthened. Vantika surrendered in a minor piece ending when Black’s victory was inevitable.

At her maiden World Championship victory, Aakanksha was interviewed at the Official Champions’ Press Conference where she shared her elation of winning the tournament. She also mentioned that actually did not come with any specific expectation for this tournament and that she tried to give her best in every round. 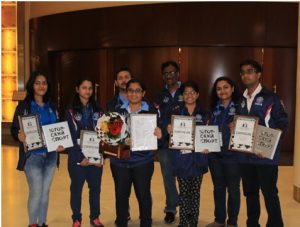 Two weeks of nail biting and eventful matches concluded on Oct 3rd with a Valedictory function that was entertaining as the inauguration, at the Ugra Classic Concert Theatre Centre. The Chief Arbiter of the championships Carlos Oliveira Dias was the first to address the gathering to who presented an update on the progress of the tournament, congratulated winners and thanks the arbiters’ crew for their support; followed by a quick address by the President of Ugra Chess Federation Vasily Filipenko and some officials from FIDE.

The Prize distribution started with a lot of enthusiasm. Organizers awarded top 10 players in each category as appreciation. Top 3 players received Gold, Silver and Bronze medals respectively and players finishing 4th to 10th received special prizes.
Aakanksha was the sole medal for India in the Championship. Aakanksha’s hattrick wins not only earned her the gold medal, a 90+ points rating increase but also the International Women Master title as a bonus!

Other prize winners from our team include, Iniyan Pannerselvam :7th in U 14 Open; Priyanka K: 8th in U16 G; Vantika Agarwal: 5th& Saina SaloniKa: 10th in U14 G.

The program concluded with fascinating music and dance performances concluding the championship in a positive and soothing note.

The championship was conducted extremely well and the organizing team at Khanty-Mansiysk indeed deserve an applause for the brilliant hospitality and support they provided throughout the championship.

As Alan Parsons once said ‘The Dark Side of the Moon has flash – the true flash that comes from the excellence of a superb performance.’ Here are few players who need a special mention for their outstanding performance in this tournament.