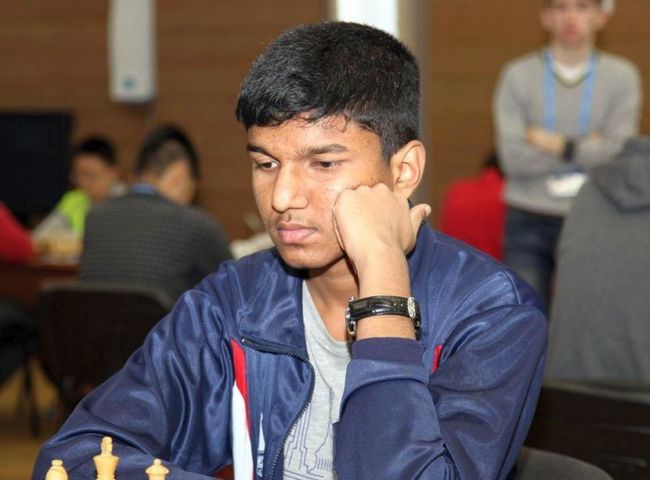 Reigning Indian Junior Champion, Harsha Bharathakoti started off on a high note in the second round of Abu Dhabi Open Chess Championship. The eighteen-year-old youngster held 8th-seeded Armenian Grandmaster Sargissain Gabriel to a draw in 49 moves.

Harsha started with English opening and after mutual exchanges white was left with a pair of bishops. It looked like white had initiative with rook on the 7th rank but with the exchange of rook, it just evaporated. With only minor piece & two pawns, game was soon drawn.

With so many Indians in fray in tournament, one can see the players on almost 70% of the boards. The brilliant run of D Gukesh is evident in the fact that he also drew comfortably with Akopian of Armenia who is also a very strong player. The game started with Nf3, got converted into King’s India Attack type of set up. With early trading of queens, white got good hold on white square. Black tried to gain access on the kingside but with bad black square bishop, there was no way for penetration. This boy is making most from the opportunities with tremendous zeal, energy for chess that in most of open tournaments he is seen playing both the sections.

Indian Women section is headed by Soumya Swaminathan right now with 1.5 points. Former World Junior Champion won the pawn in early middle game from well trodden line of Dragon variation of Sicillian against Alexander Fier (2561). But she had to make some concession in the form of weakening pawn structure and white squares on the king side to get the pawn which handed black some compensation. Soumya could not find a good plan to convert her advantage and the game was ended in perpetual checks by black.

Raja Ritvik is one player who is probably 9 out of 10 on the scale of improvement with each passing tournament and He proved this by draw against GM Lupulesku Constantin from Romania who is five times National Champion. With typical pawn structure arising from Queen’s pawn opening, neither of the player looked inclined to press further and draw was agreed. Good for Indian boy that he may gain some rating points with this draw.

Rounak Sadhwani is another upcoming junior player from India who got on the nerves of GM Adly Ahmed of Egypt. Tough he was pawn pawn in the kinght endgame, Adly probably does not seem to have come out of yesterday’s shock where he had clearly minus position against Mary Ann Gomes of India, he was not able to convert that advantage of pawn.

As the tournament is heating up with seven rounds to go, we will witness some enterprising games and hopefully will come across some good opening preparation with novelties.