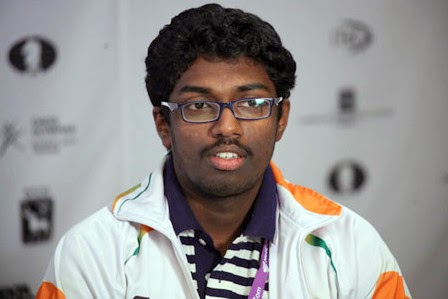 Former Indian and former world under-16 champion Baskaran Adhiban scored an impressive 7.5/13 good for the third place in the Tata Steel Group A Chess Tournament that concluded at Wijk aan Zee in the Netherlands on January 29, 2017. For such an outstanding performance rating of 2812, Adhiban gains the most rating of 29 points in this 14-player super category 21 event (average Elo 2751).

On course, Adhiban won four games, lost two and drew the rest of the seven games. He defeated Karjakin using the French defence as black and drew Carlsen playing the Scandinavian defence with the dark colour. Adhiban played all kinds of unusual openings and it included the rare king’s gambit against Wesley So that was drawn. He suffered two defeats, one to countryman Harikrishna and another to Eljanov. Adhiban was accompanied by his parents.

Wesley So, born Oct 9, 1993 broke Carlsen’s record of the youngest player to cross the 2600 rating mark in 2008. He is now the eleventh player ever to cross the 2800 rating mark. He won the Sinquefield Cup 2016, London Chess Classic 2016 and by winning the 2017 Wijk aan Zee event by a one point margin, he will be seen as a future challenger to Carlsen. Notably, in March 2016 he received the Samford Fellowship which grants him US$42000 to train and play in top events. He remained undefeated for the second year in a row at Wijk aan Zee. Needing a draw in the final round for the title, So won with the black pieces against Nepomniachtchi to claim his maiden title in this elite event in style.

Last year’s champion, Carlsen, who was unexpectedly defeated by Richard Rapport of Hungary, struggled and is losing Elo despite finishing second with eight points. Carlsen missed a mate against Giri and stalemated the Dutch player after 123 moves.

Harikrishna lost to So and Van Wely, the top and bottom finishers of this event. He was solid with the others scoring 6/13. He is losing about eight points. The 79th edition of this event was smoothly conducted and the festival attracted over 2000 players. Wijk aan Zee is a village of less than 5000 people by the Sea and about one hour drive from Amsterdam.